The biggest little whorehouse in Germany

Once one country does something stupid the question on everyone's mind is who's next?  Thus when France went libtard in 1789 everyone attacked them, and when the Russians went Soviet we adopted a policy of containment.  The thing about ideas is they tend to move from place to place.  One person says something stupid and the other stupid people hear him and the next thing you know you're getting tortured in a gulag.  This is why Christ said a man who accepts the words of a prophet has a prophet's reward.  The prophet speaks first, but it takes the heart of a prophet to hear one.  The question, whenever you hear a prophet or a moron, is whether your country is full of prophets or morons.  This is why the liberals have taken over the school system and the media, and nearly everyone, until the Enlightenment, was heavily in favor of censorship*.  Simply put we took one look at our neighbors and knew they'd fall for anything.


This time they fell for whoring.  Germany, in a move that stunned even the scandalous Italians, decided to turn their country into Las Vegas, and now the English and others are worried.  The Germans, of course, like everyone else caught with their pants down, had an excuse.  They said they did it to protect women.  Too dangerous on the streets with pimps and such; so they decided to move it into brothels.  What happened next was obvious.   A large surplus of abused and ruined women, usually abandoned or molested as children, many of them from Bulgaria and Romania and already mastered by pimps, flooded the country immediately.  Megabrothels opened overnight.  The number of Johns increased exponentially.  Prostitutes became a mainstay at their carnivals; mega-pimps became nouveau riches; and the German people, once known for alcoholism and Nazis and other hilarious monkey shines, became known for taking advantage of Europe's most unfortunate women.  Even when the Germans are helping people they're hurting people. 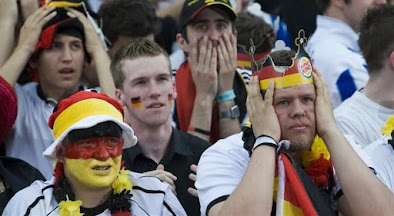 It's estimated by the German government that 400,000 such hookers live in Germany, and that 90% of them, one way or another, are still forced into it.  Five times more prostitutes than are estimated in England.  At first the going was "good."  The hookers saw an influx of cash, and it was estimated that if you couldn't save a nest egg you could maybe feed a family.  Money was being sent back to feed starving mothers and fathers in Romania.  The Johns came in, on "good" nights, sometimes 15 to 20 if you were lucky.  But then something happened.  The market became glutted with whores.  Brothels opened next to brothels.  The smallest towns had their bordellos.  The number of Johns per woman dwindled, and the hookers themselves began to get desperate.

This is all shown in a documentary called The Mega Brothel, available on Amazon Prime; and beyond the prostitutes themselves we get a glimpse at the lives of the mega-pimps.  One man, head of the biggest brothel chain right now in Germany, called Paradise, says it's a family business -- but no mention, so far as I can remember, is made of his wife.  I suspect she left him, like his manager's wife estranged him.  The owner brought his son to work with him for years, and was planning to pass it as an inheritance -- but the boy decided to kill himself first.  The daughter he brings to work (!) is proud of him, and plans to get into the business herself -- but only the managerial aspects of it.  When asked why not the whoring, she says it's a "tough question" which she "can't answer."  At this point the camera pans to the father, and the expression on his face is the highlight of the whole film**.

Around this point you begin to wonder if the Germans have any dignity.  The answer is no.  Their knights in shining armor, at least in this documentary, are almost all women, and beyond this many of these saviors are short-haired and frumpy and sexually useless; not exactly the type to reclaim a healthy sexual culture.  One group of angry feminists crashed an opening party for a new brothel -- predictably topless, and screeching, and eventually thrown into a paddy wagon.  A good cause fought so badly it makes you want to side with the pimps.  Even when they're fighting for dignity the feminists are embarrassing.  To make matters worse, so far as I was able to make out, their main objection to the industry wasn't even selling sex for money, but coercion.  A feminist believes strongly in "her body, her choice."  She thinks blowing sleazebags is a career choice, but staying home with the children is a tragedy.

It should be mentioned here that these protests deeply offended the mega-pimp.  He says, predictably, that he isn't taking advantage of any women -- that they all come to him (true), that he charges them entrance fees to the brothel but doesn't skim anything else off their earnings (also true), and that the women who work for him are happy.  The manager, before he was arrested for trafficking, said differently.  He said the women were a disaster -- completely ruined, and that they had "no souls."  But I suppose this is the difference between a man who owns a business and a man who only runs it.

I can't recommend this documentary to any of Christ's boys, but the heathens will enjoy it.  There's simply too much T&A.  But I recommend it to absolutely every woman I know, and I advise her to take notes from it and share them with the men she knows.  At least, if she doesn't want hookers parading the festivals for her sons, and pimps out combing the high schools for her daughters***.

*On this ground I agree with the liberals more than the "free-speechers."  In a school system, free speech is the fraudulent pretense of the underdog.  When the free-speechers get control, what they want is to teach people the way they see the world.  No honest and intelligent man, sending his kid off to college or founding a college or going to college himself, is going to require classes in Hinduism, flat eartherism, queer theory, voodoo practice, hip hop history, or prosperity theology.  The liberals have taken a similar stance, and as they don't believe in capitalism, or Jesus, or gender roles, or the rule of law, or the right of white people to have a country, they teach everything they can to disgrace them.

**The second highlight of the film involves the most likeable whore in the bunch: a curvy, charismatic blonde with an adorable accent and a strange sense of dignity.  She said that men are allowed to touch you on the arm, but until they enter a bedroom and pony up the cash, if they touch you on the breast or anywhere else suggestive she tells them to stop it.  "We're prostitutes, not sluts."  A hierarchy of dignity that I never knew existed -- but now that I know about it, I agree with it.

***One method of pimping is known as The Boyfriend Method, and is primarily used on young girls.  The girl is approached by a young man and asked out on a date.  After a few dates he tells her he's in love with her.  A short while later he invents a financial disaster; she's encouraged to whore out to pay for it; and the natural instincts of a young girl to nurture and care for her loved ones is wasted -- on a man who takes all her money, and eventually turns abusive.  These girls are frequently subject to trafficking, and prosecuting the men is difficult.  Is he a pimp or her boyfriend?  Those in charge of the law, unfortunately, many times find the line too blurry to decide.