Other people's opinions are distasteful at best and worth a hanging at worst.  That's why they belong to other people.  Who wants to eat ketchup on eggs, or vote for Bernie Sanders, or make love to a bald-headed 400 lb gender studies major?  Not me, not today, not any day; and I've placed them in this order to show that yes -- these things do actually happen, and 2) please keep them away from me, and 3) they exist on a scale of disgust.  If you do them yourself, you might get a laugh.  But try and force them on me and you've started a war.

A war we're on the verge of, all day, every day.  We tell each other, of course, that we all like being able to speak our minds; but the downside of this is we hear other people's minds and we hate them for it.  We loathe the tide of half-baked ideas they share, day after day, about how the world could be better if we'd only just open the border, or give free apartments to bums, or never use plastic, or put women in charge of everything, or enforce the book of Leviticus, or give away all our guns, or put people in jail for blasphemy, or get rid of profit, or capital, or genders, or taxes, or churches -- any of these things, it turns out, which would be completely disastrous and yet despite this are preached, day after day, like they came from the mouth of our Lord and Savior Martin Luther King Jr.*. 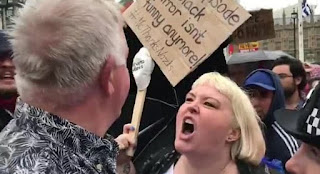 No -- democracy is terrifying because people are insane; and every moral statement, whether brilliant or stupid, whether passed casually or shouted ex-cathedra, is an imposition of some sort: at best a little pain because you feel like you don't fit in, at worst a fear your whole world is about to get wrecked.  A social discomfort and a nightmare combined: the idea that one day you could wake up, and if enough people signed a petition, you might have to throw on a burkha and then marry a transgender.

The leftists realize ideas become things and that's why they're terrified of free speech.  They believe the game we play so casually, the lazy chats at dinner or the break-room, might turn into sanctuary for a Mexican or banishing him at the border -- in essence that what you're speaking isn't words, but lives.  That when you drop that ballot into a box you aren't dropping a piece of paper, but little sheets of life and death, riches and poverty, harmony and hatred -- your will over others',  your children over others',  your future over others', whatever-you-want uber-alles.

And so arises this belief, endemic among the left, that the first person to get angry is the better person.  That punching and shouting and shaming are more righteous than talking.  They think it means you care, and that the punches they throw might break a jaw but in the end save a kid.  All true, of course, except everyone is fighting for some kid, and beyond this everyone believes that he's right.  Thus a call to arms is never just a call to your arms.  It's calling everyone else to arms too.  It means that everyone with an opinion different from yours is no longer forced to talk about it, but to punch about it, and that whoever has the most punchers is going to win -- not the best speakers, not the best thinkers, but the best punchers.  Not the best philosophy but the first: I think it was invented by the gorillas.  Too old-fashioned for my taste, but these are our progressives.

The truth is these punch-throwers are weak, and to live in a free society you have to be tough.  Not just in the fists (which are important to any civilized man) but in the soul.  You have to be ready, every morning, for other free men to say terrible free things, and to brave this insurmountable tide of idiocy with a face so stoical and easy-going, that other people will open up to you and you can start exchanging ideas.  You also have to be prepared to realize that you, a person who does not know everything, might be the idiot, and that life itself is a process of conversion --  to things you never even imagined you'd believe.  (There's also a time, rare but absolutely essential, to take a stand and tell someone to shut the hell up)

Is this easy?  Absolutely not.  It requires both the patience of a saint and the acting skills of a playboy.  But the alternative, missed by every short-sighted do-gooder, is harder.  We either exchange ideas now or people act on them, without thinking them through, at the voting booth.  We open up our dinner tables to the enemy because we don't want our front doors kicked down by policemen.  We pretend to not be offended.  We say hit us with the words so we can avoid getting hit with the things.  We're too prudent to look righteous.  We're too righteous to look bigoted.  We abandon the grandstanding and move in for the substance.  We're the last of the classical liberals.

PS: Every time we get a new president, his side is surprised to discover the that other team is filled with cutthroats, imbeciles, and outright lunatics -- people who have no idea about the concept of cause and effect, or a fair or valid argument, or the value of researching their own childish opinions, and are ready to slit your throat over it.  They make effigies and burn them over the silliest reasons.  They talk every day about how Hitler has been reincarnated and their duty is to shoot him.  They rejoice that their brethren are preparing for revolution, and that acts of violence and outright barbarism are not only noble, but the defining marks of God's chosen people.

There's no arguing with these terrorists, and so far from saying we should turn the other cheek my first instinct is to weed them out -- to take their threats seriously when they're made, and not only punch back, but aim to destroy them entirely, like rabid dogs, or an infestation of lice.  I hate antifa, but I hate Gandhi worse.  There's no reasoning with the thug or psycho except through violence -- and God bless every man on our side who's ready and willing to fight fire with fire.  Once punches are thrown the classical liberal has to throw aside civility and fight back like a drug-fuelled medievalist.

But this of course brings a question.  What exactly is "freedom of speech" if not the right to say the president is Hitler?  And what is "the right to bear arms" if not to be ready to shoot at him?  At the center of our constitution is not just the idea, but the engine of armed rebellion.  We want the idea but can't handle the substance.  We only approve of our side's rebellion -- if that.  The idea of the other side doing it is a nightmare.

My answer isn't an answer but a riddle -- that the right to be a rebel exists alongside the need for law and order; and that a people who can't balance the two, like they balance a healthy sexual drive with marriage, deserve neither.  A good life is neither rebellion nor conformity.  The threat of rebellion keeps government from oppression.  The threat of righteous government keeps our madmen from rebellions.  A people without pugnacity results only in tyranny.  A government without gusto is a recipe for anarchy.  Truth be told an anarchy is worse -- but as with all other things in life, our prosperity isn't found in the extremes, but in a balance.  The gray line between tyranny and anarchy has no definition but our approval -- smart men know it when they see it and they love it when they find it.  But right now we aren't surrounded by smart men.

*This passage about "our Lord and Savior" was intended to be a joke but ended up speaking a truth.  Among the things you can challenge Jesus about are His authority and His veracity.  Try doing this to Martin Luther King Jr. and find out what happens.  You're free to challenge The Sermon on the Mount.  Try it with I Have a Dream -- if you dare.  You may argue about whether the Cross can be left on a hill, or even whether "in God we trust" should be on a bill.  Once Martin Luther King Jr. appears somewhere it's impossible to even argue about removing him.  Christ is no longer the God of the West.  Our Christ is a black man, and his Gospel, which can't be contradicted without losing your job and possibly being punched in the face, is made of iron.