Huston Smith's Buddhism: A Concise Introduction is a suspicious book.  Or at least it is to me.  I've known for a long time now that if you want to learn from a great man, and especially a spiritual man, you've got to go to the man himself.   None of this What Plato Taught nonsense -- you skip the interpreters and go right to the Republic.  A failure to do this means you never get to the man.  It means you have him filtered through the soul of a most-likely lesser man.  Probably some second or third-rate regurgitator, with his own opinions on the maestro's opinions, some handy insights that will probably mislead you, and a host of things he'll want to sweep under the rug.  Hence the fact that Jesus is beloved by feminists, capitalists, anarchists, communists, Muslims, libertines, puritans, social justice warriors, the Christian Identity movement, slave owners, and abolitionists.  Each of them claims Him as their own, and each of them has some idiotic book explaining why.  This is probably why Jesus hasn't come back yet*.


Thus Huston Smith's Concise Introduction is suspicious.  You pick up the book and are immediately blown away, at least if you've read the Scriptures, by how close Buddha's teachings are to the Bible's.  First off there's the first premise of Buddhism, that life is out of joint** -- flawed, and enough so to be ruined.  This is the same thing as Genesis.  Then there's the idea that you have to lose your life to find it.  This is a central teaching of Jesus's.  Then there's the idea that your desires are the things that cause all your problems.  This is ripped straight out of the book of James.  Then there's the statement, by the Buddha, that you have to work out your salvation with diligence, a thing taken nearly word-for-word from Paul.  I could go on, but unnecessarily -- there are too many instances bordering on plagiarism to note.

I said ripped straight out of James, but the inconvenient thing here is that Buddha came well before Christ -- in fact, around five-hundred years before.  This gave his teachings time enough to take root in the Far East, just before the Romans came to power and established trade routes with the world.  Right before they killed Jesus.  So here comes the big question.  Did Buddha influence the Christians -- maybe Christ Himself?  Or are these truths so universal that a great man could discover them anywhere?  Did Huston Smith cherry-pick these doctrines to make Buddhism appealing to Christians -- like Augustine popularized Christianity with the Platonists?   Or is it as the Christians say -- that all truths are Christian truths, as all good things are God's things?  All these questions will be swept aside either for The Final Judgment, or until further research.  I have yet to read the Dhammapada, or familiarize myself with the different Buddhist sects.

Whether or not there's conspiracy here, I learned great things from this book.  Aside from a slew of useful anecdotes*** and historical facts, the first is the reminder, easy to forget, that all life is in flux, and that means you as a person yourself.  There is no "normal" you, and the chasing after this normal you is a great source of unhappiness.  You can either improve or get worse but you can't stay the same.  Your chemistry is different day to day.  Your mindset and focus are constantly shifting, along with your knowledge, your health, and your affections.  To know yourself you have to think about what you're feeling constantly -- to analyze yourself, a la Montaigne, to chew on your own emotions, not to judge them at first, but to understand them so you can master them.  This book reminds us that honesty is always an uphill battle, and each of us is a deceiver -- not just of others, but of ourselves; a deception which happens out of fear, which has to be recognized, or else we risk it hindering our development.  Freud said it and Plato said it.  Read yourself to know yourself.  Know yourself to better yourself.  All easy to say and hard as hell to do. 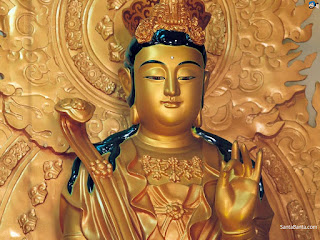 Perhaps the most fascinating part of the book was the fact that Buddha was just as much the first Buddhist as an old Hindu.  Apparently the Hindu religion was dominant when Buddha arrived on scene, and had been for a long time.  Long enough to have missed its own point.  One of its biggest tenets, that God is turning all life into other forms of life, was wildly perverted to keep some castes on top and ground other castes into the dust.  The original texts of the holy books were only written in old Sanskrit, a language both foreign and incomprehensible to the majority.  Religious donations, exacted from the faithful for religious teachings, were used to prop up the lavish and debauched lifestyles of a decadent clerical class.  An unbearable and incomprehensible load of rituals detached the public from a pure and practical spirituality.  Superstition thus held sway over the public mindset.  When superstition didn't derange the faithful, doctrinal hairsplitting did.  The religious scholars fought great battles, not over how to save your soul, or how best to live in peace, but over angels standing on pinheads and other such retarded arcana.  The ascetic monks, believing that you could be liberated by whipping and freezing and starving yourself, had turned "the holy life" into a masochistic circus show.  The idea of karma, otherwise known as God's justice, was used not to spur people on to good works for a future existence, but to justify cruelty to the already unfortunate.

The Buddha took a good look at all this, chewed on it a while, and decided to spit it out.  He destroyed the clerical class wherever he could wreck it, demanded all religious teaching be done in the popular tongue, got rid of the rituals, mocked the ascetics, and taught that anyone could reach Nirvana if they followed the narrow path.  He said there would be few who find it.  They say he was the first Buddhist, but from the looks of it he was the first Protestant.

*There's always someone out there saying the Gospels aren't the "real" Jesus.  My answer to this is it's the only Jesus we've got, and it's the Jesus the Christian church has been acting on for thousands of years, so the "real" Jesus is irrelevant.  There is Jesus as He was and the Jesus we've got left.  There is a man none of us have ever met, and the official idea of the man -- which each of us, in some way or another, deal with every day, through His impact on His followers.  Only one of these has any relevance.  The other is what people make up when they want to follow themselves -- and what they push when they want you to follow them too.

**The idea that life is "out of joint" is a central principle of any serious religion -- because it's a central fact of human psychology.  In order to survive we have to dream.  In order to chase good things and avoid bad things we have to imagine that things could be better.  Is it any wonder that all humans dream about heaven -- or at least imagine that life could be perfect?  Physical pain is the lot of the whole animal kingdom.  Disillusionment is man's to suffer alone.

The Buddha, so far as I can tell, says that to avoid this pain you've got to avoid the dream.  I believe that the harder we dream the harder we suffer -- but that every bit of advancement we experience is the result of someone who won't stop dreaming.  As a capitalist, I believe we owe even more of it to our "selfishness."  I prefer the wisdom of the Stoics to Buddha: that there are some things we can change and other things we can't and we need to know the difference.  But without anyone trying the "impossible," would we ever gotten this far?  And in many experiments, would we ever have failed so badly?  We reach higher and fall harder.   We alone, among God's creation, were born for high stakes.

***An example of one of the anecdotes:


If you find no one to support you on the spiritual path, walk alone.
If you see a wise person who steers you away from the wrong path, follow him.
The company of the wise is joyful, like reunion with one’s family.
Therefore, live among the wise, who are understanding, patient, responsible and noble.

But none of this is new. Solomon wrote as iron sharpens iron, so one man sharpens another.  Paul said do not be unequally yoked.  Before and after Buddha, there was wisdom.  Who are we to claim to discover it first, or to own it?