HBO's first season of Westworld is so good that we're worried it will continue; and in doing so joins a series of series that would've been better if they'd left them unfinished.  The first series I remember starting this well was The Matrix, followed by two sequels that gave us more of the story but none of the magic.  It was followed by things like The Hunger Games, which gave us a solution when what we really wanted was more of the problem.

Call us sadists, but people love the mechanics of suffering.  The plot isn't so important as the discovery of a person.  Out of Neo the scared computer nerd we got a God-like transcendent.  Out of Katniss the unarmed peasant we got the killer revolutionary.  Each of these stories was a three-part surprise.  They gave us a nobody, the nobody was hit with life, and the nobody through a process of suffering became somebody.  When they learned to be brave and tough and who they were and what it meant they had to do, the story had served its purpose.  There was nowhere to go but to end it.  When they added more story they added no value. 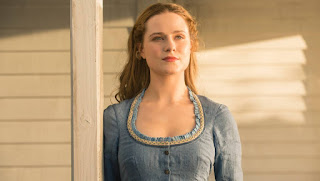 In my opinion it's impossible that a Westworld sequel could do better than any of these stories, and that its season finale would have been better as the end of the series.  Westworld's virtue isn't that it discovers a person but that it discovers people in general, and in the process of evolving Dolores and Maeve it's totally exhausted its magic.  The second season may be interesting -- but it will have to be a completely different kind of interesting: probably an action film.  The existential questions plaguing the first part may have never been answered.  The beauty of them was in the fact that they were asked.  What makes me human? -- why am I living? -- why do I suffer? -- what makes me happy?* -- where did I come from? -- what is my purpose -- what makes me me? are all questions that people have asked themselves, consciously or unconsciously, throughout their existence.  Westworld asks all of them about robots and leaves us wondering them about humans.  It digs through all our feelings and makes us question our reality.


If Westworld's good at asking us questions, it's great in hinting at others.   The overwhelming implication of Westworld is that evolution has done for humans whatever humans could do for artificial intelligence; and that each of our memories, each of our dreams, each of our strengths and our weaknesses and instincts and personalities are have been given to us through a process we didn't control.  Whatever we are, we can't be anything else.  Our thoughts feel organic -- but they're actually more like mechanics.

It needs hardly be mentioned that this question of souls and machines and what they mean for our dignity has been plaguing philosophers for millenia; and when it wasn't plaguing philosophers and scientists it was causing fights between theologians and prophets.  What they all agreed upon was that humans are dreamers and conscious of choice.  Beyond this it was chaos.  Some believed in fate and others believed in freedom.  The Pelagian, forgetting that our entire existence was centered around our desires, believed that we could choose whatever we wanted whenever we wanted.  The Calvinist believed all of us were trapped in our natures.  That we could only prefer what we prefer**.  That the Fall of Man meant we couldn't get back up.  That salvation was an act of God (in Westworld played by Anthony Hopkins) and enlightenment was a gift of the Holy Spirit (played here by Jeffrey Wright).  In Eden we'd achieved the ability to choose evil, and in the process lost the ability to choose entirely rightly.  In heaven we'll gain the ability to be good -- and will apparently lose the ability to choose evil.  All of this is explored in Westworld, in an allegory so artful we're almost not sure they're trying to teach it.  If it wasn't so filthy we might even gift it to pastors.

Another aspect of our humanity Westworld explores is whether the created is less valuable than the creator; and whether something we can make at will is something we can destroy for pleasure.  The parallel between Westworld and abortion was never explicitly drawn in the series, but it could be easily implied; and the insistence on dignity as a matter of consciousness is something we argue about when we talk about animal rights and the mentally disabled.  Many people have argued that the soul is what separates us from machines and the animals.  If we're paying attention, Westworld is asking us what exactly the soul of a man is.  We say that parts of a machine can be turned off at will.  What we've forgotten is that the same can be said of our minds.

If you've ever seen a man you respect have a stroke and lose his ability to speak, and you find that man grasping in vain for words he knows but he's incapable of saying; and maybe the struggling leaves him frustrated, and maybe it leaves him angry, helpless -- crying like he's never done in front of anyone else his entire life, then you might come to the conclusion that we're at least partly mechanical.  A stroke can mean a loss of language.  Depression means a loss of emotions.  Insanity means we lose our ability to reason.  Alzheimer's means we lose the ability to remember.   Each of these things are crucial to who we are, and each of them can disappear in a moment -- and not only can disappear in a moment, but will disappear in a moment.

And it turns out that the difference between us and the robots in Westworld is smaller than we thought.  It turns out that one of us thinks we're more real than the other, because one of us can be given a personality by a person and the other one's given a personality by nature; and one of us can be turned back on and reset, and the other one breaks and then rots in the ground.  Westworld asks us why we'd think this way, and that's why it's brilliant.  How anyone can maintain this sense of existential wonder into a second season is a mystery -- and hopefully one that the writers of Westworld have already solved.  But I doubt it.

*Westworld is probably at its artsiest when it approaches the concept of happiness.  We lose people and grieve over them.  But even though it hurts to think of them we insist on remembering them.  The people in the middle of the action want quiet, and the people living in the middle of the quiet want action.  The people too aware of their destiny want freedom, and the people who are terrified of freedom crave the securities of destiny.  We find happiness and purpose even in pain.  We want what we don't have and forget to value what we do.  We're jealous of what others have without asking what they'd like to lose.  We believe we can ever be totally happy, when highs die down and we get tired of things and are constantly changing our plans and rethinking our lives.  We forget that life itself is dynamic -- and the only place we can rest is the grave.


**Regarding freedom of choice, our parts we didn't choose make up a whole we didn't always expect.  Our intelligence doesn't mean we can choose to do everything.  It means we can imagine doing anything.  It means we can dream about the possible, and then throw away the possible in pursuit of a single decision that's preferable.  You're physically free to stab yourself in the eye at this moment, but would you do it?  My money is on no.

The fact that we can't prefer anything other than what we prefer has puzzled and terrified people for centuries.  We're trapped, but only in the pursuit of happiness.  The things that we love are a cage.  In those moments we want what we shouldn't, this can seem like a prison.  In the moments we want what we should, we love it and call it our liberty.  We view and we weigh and compare all our interests; and the wiser we are, the more intelligent we are, the more perceptive and creative and independently-minded we are, the more paths that we'll see and the better we can choose -- and the more we're surprised when we don't choose the "best" ones.  A man was once asked who he'd meet if he could meet anyone in the world.  He answered that he'd like to meet the man he could have been.

The Apostle Paul, a man supposedly indwelt and moved by the Spirit of God, spoke of this experience when he wrote his epistle to the church residing in Rome:

--a passage celebrated by anyone with an ounce of humility, and counteracted in 1 John 3:4-10 by anyone who is tired of Christians making excuses.