Your truths and mine

Why do people say speak your truth?  I was always taught that if it's only your truth it's not true.  You might as well hang a sign on your chest that says lie to me. 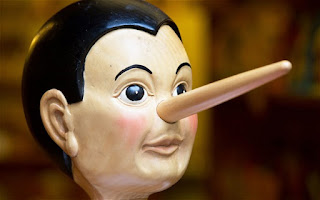 If, as I suspect, this is a nod to human idiocy then it might actually be worthwhile --  a kind of "let's hear the man out" so we can decide what to do with him.  You speak your truth and if it's the truth then it becomes my truth.  At the very least speak truthfully.  If you're wrong then you're going to end up hearing my truth.  At least this is the most I can make of it*.

Martin Luther, admitting human ignorance but knowing we had to figure things out, and not willing to put every honest man into a blind and unmanly paralysis, told us to put our good intentions and our zeal alongside our half-baked convictions and sin boldly.  It was better for us to try good things and find out they were bad things than to question all things.  Your mind might never be all there but your heart can still be.  It looks like murder but he preferred it to suicide.

I think Ben Franklin was a few steps ahead of him.  Ben advised us, in conversation, not to tell others their truths were theirs, but to let others know that our truths were ours.  Preface a statement with from what I can tell, or it seems to me.  Disarm your opponent, not by shoving your truths down his throat, but by leaving him an option -- by making your statement look like a question.  His ego's intact and your statement takes root.  A far better way of going about things than telling someone their truths are theirs.

The Marxists used to believe there were different logics for different classes.  The poor people had their logic and the rich people had theirs.  But the truth in the end was that logic was the same for both of them and so was reality.  It was the things they were arguing about that were different.  One of them had reasons for lower wages and the other had reasons for higher.  One of them had reasons for property rights and the others had reasons for redistribution.  Marx said poor people could only think one way and rich people could only think another way and then his rich fingers penned a theory for poor workers -- and made poor people even more destitute.  There was a truth in all he said, and it was that the bourgeois had the best truths for all of us.  The truth of the poor man was his stomach was yelling at him and his children were freezing to death.  The truth of the rich man was if some of us didn't starve most of us would.

*When I say this is the most I can make of it I'm being generous.  So far, speak your truth happens when a man's telling us he's a woman, or when a woman's telling us to crucify a man.  If someone has a theory I'd like to hear it -- and I would like to shoot it down if it's garbage.  Our leftists are for the first and against the second.  When they say "speak her truth" it's because they already agree with it, regardless of whether it's true.  They want to shove it down your throat.  When someone's spoken "her truth" it generally means you've been given a new gospel.  You speak against this revelation and you're up against the inquisition.  They want you to believe absurd things and if you don't absurd things will happen to you.