So far as I'm aware no description of heaven has ever matched falling in love or even clocking out for the weekend.  Hell of course is all too real; and the fire, the brimstone, and the gnashing of teeth mean far more to us, in real terms, than golden harps and an eternity of worship.  Have the Christians given us a picture of ecstasy as good as eating ecstasy?  No -- but I admit that a brand new chemistry may be the foundation of the New Jerusalem.  You can be high as a kite and be boring to everyone but yourself (hence the golden streets [yawn] and singing angels); and if heaven is a giant rave, as the eternity spent singing suggests, perhaps the Christians fail at describing it because they're against candy-flipping on earth.

Orwell says the reason nobody, including Dante and Milton, can describe heaven and make it appealing is because happiness is less obvious than pain.  We get the pain because the pain needs no explanation.  But you start describing happiness and suddenly you find you're in a conundrum.  What makes us happy here?  Getting things that are hard to get. Holding on to things we could possibly lose.  Relaxing after a day of hard work.  Poisoning yourself with alcohol or acid.  Putting two and two together in a moment of eureka.  Chasing after things that don't really exist, or if they do exist, are not as fun when you get them because you'd spent too much time dreaming about them.  Getting surprised in a good way.  Eating when you're famished.  Narrowly avoiding a calamity and being well aware of it.  Hanging on to a moment we know won't last forever.  All of which, by the way, are incompatible with the idea of a suffering-free heaven; and beyond this outright offensive to it.  Above I've listed scarcity, chemical failure, the existence of ignorance, delusion, disappointment, a constant change, hunger, the need for survival, and the possibility of catastrophe -- each of which, in its own way, forms the bedrock of all happiness, and each of which is responsible for our misery.  Our happiness isn't always a thing -- more often than not it's an escape.  Happiness is something, like flowers, that grows out of the mud. 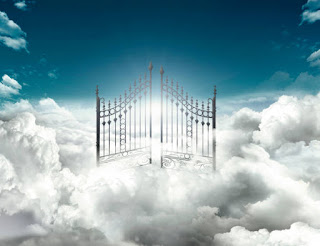 Thus in those moments of sadness, sometimes caused by bad things and other times for no reason I can pinpoint, I remember that I'm paying the price of happiness in general.  And when I want to be happier than just being comfortable, I remind myself things could be worse*, that what goes up must come down, and that when we finally get so happy we can't stand it, we end up crying anyway.

*Schopenhauer writes of comfort in his Counsels and Maxims,


we live through our days of happiness without noticing them; it is only when evil comes upon us that we wish them back. A thousand gay and pleasant hours are wasted in ill-humor; we let them slip by unenjoyed, and sigh for them in vain when the sky is overcast. Those present moments that are bearable, be they never so trite and common,—passed by in indifference, or, it may be, impatiently pushed away,—those are the moments we should honor; never failing to remember that the ebbing tide is even how hurrying them into the past, where memory will store them transfigured and shining with an imperishable light,—in some after-time, and above all, when our days are evil, to raise the veil and present them as the object of our fondest regret.