Even when we had mischievous gods we were better than the Mexica, the most dominant tribe of the Aztecs.  Going all the way back to the Romans, God might throw an army under the bus because a general broke his word; and the Jews, the Muslims, and the Christians all believed God was better than us -- which is why He warred with us constantly.  Huitzilopochtli, the main god of the Mexica, had no such benevolence to fall back upon.  You fed him or he would wipe you out.  And the way that you fed him (and other lesser deities) was by flaying people, or burning them alive, or cutting out their hearts.  Sometimes two of the three.  I'm told that some priests even took the human skin and wore it, like Leatherface in The Texas Chainsaw Massacre.

Things had been this way for a long time before the Spaniards arrived, but by the time whites did get to America, the Mexica religion had already reached its worst.  Decades of bloody imperialism had brought the Mexica to the top.  A few years of heavy snows and crop failures had brought the empire to the brink.  They cranked up the sacrifices to a level nobody had ever seen before, perhaps in the history of the whole world -- ten thousand in a single festival, circa 1450; and, unfortunately, right after they did, the weather got better again.  This reinforced the already murderous mindset of the Aztecs, and they went ravaging the countryside for people to loot, rape, flay, and burn.

T.R. Fehrenbach says in Fire and Blood, his history of Mexico, that estimates of victims after this "miracle" range from the tens to the hundreds of thousands.  At one point the capital, Tenochtitlan, became so covered in blood that diseases easily broke out; and its lake, which was already on the verge of toxicity, became filthy, putrid, and dangerous.  Tallies of the dead depended on who was doing the talking.  The pro-Spanish conquistadors, whose interest lay in demonizing the natives (and thus taking an obvious moral high ground), said they found as many as a hundred-thousand trophy skulls; and Bernal Diaz says around twenty-thousand people a year were slaughtered before the conquest.  The pro-Indian Spaniards, such as Bartolome de las Casas, looking to downplay the atrocities and save an already brutalized ex-brutalizer, said the yearly "expenditure" was only a hundred.  Nice guy, but definitely a liar.

Some people might blame the Mexica for bulldozing and brutalizing their neighbors, but the plain fact is that their neighbors, had they had the genius and organization of the Mexica, would have done the same thing in their place.  Culturally and religiously they were too similar.  The Mexica simply beat them to it, like the Spaniards (thank God) out-produced and out-organized the Aztecs, and like we beat and out-bred the Spaniards*.

The great Mexica conqueror's name was Tlacaelel, who ruled somewhere between 1430 and 1481.  A great founder like Lycurgus, or Moses, though he preferred to work behind the throne rather than on it.  He took a backwater, down-on-their-luck people and gave them a new history.  Told them they were the chosen race, sent by Huitzilopochtli, the Sun-god, to do His will.  What was God's will?  Not to be just, or wise, or even just kind, but to make all the other races sacrifice the right way and to the right god.  How were they to accomplish this?  Through a heartless and perpetual warfare**.  Obedience on earth was rewarded with wealth, and power, and successful crops.  A good death was rewarded by an eternity in paradise.

Tlacaelel gave them the myth and then organized them into an army.  They were just a random tribe, at first, and relatively egalitarian.  He split the people into classes, and the first of these was the warriors.  Being a warrior was the only way up after that.  You had to distinguish yourself in battle or you would never get a fiefdom, or a good position in the government.  Once you did kill enough enemies, you took land and serfs and slaves from all the peoples around you.  You made them work for you, giving them only a bare subsistence, like the Spartans did the with the Helots, and you used everything beyond this to enrich yourself and your family.  You would be given a title, and the title would be passed on to your children.

Beyond this military aristocracy sprawled a massive bureaucracy -- the lawyers, engineers, teachers, administrators, and other officials necessary to keep up the Aztec empire.  Most Mexica lived on their own little plots and farmed for themselves and their families.  Massive amounts of land, on the other hand, were stolen from (and worked by) the conquered.  A merchant class, not existing for the sake of itself, but to do the bidding of the state, ran special errands for the government.  I'm told by Fehrenbach that nobody except the freeholder, working his own land to feed his own family, worked for anybody other than the state.

So war socialism was the modus operandi.  Large tracts of farmland, known as Shield or War Fields, were tilled by slaves and reserved for the military.  Thus warfare became long-range, and protracted.  Nobody in the whole region, reaching from the desert up north to Panama down south, was safe from rape and plunder and sacrifice.  Pretexts to warfare were easily invented.  An insult, a delayed tribute, a harassed merchant were all excuses to mass-murder.  And I'm told the Mexica were experts at being insulted. 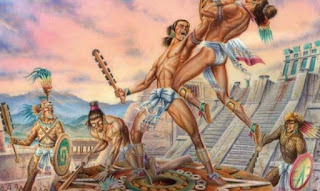 You would think that subjugating the neighbors would be enough for any people, but the Mexica were bad at forging alliances.  Why sacrifice your own people when you can capture the neighbors?  So for a while they left enemy cities virtually in charge of themselves and put them under tribute, and when rebellions perennially broke out, they decided to raid them -- unless there was an unconditional surrender.  There was no Pax Mexicana.  Wars were staged to find victims, and the need for victims was endless.  Governors were placed over cities, and cities were brutalized into rebellion.

Religion aside, the machinery of the state would allow nothing less.  The most prominent people in the society were warriors.  The only way for the lower classes to get into the upper classes was by killing, or capturing.  The growing bureaucracy needed more plunder.  The Mexica peasantry wasn't allowed to be plundered.  And the best way to get into heaven was by dying in battle.  There was probably no people, in the history of the world, more inclined by their system to mass-murder.

I try to avoid comparing people to Hitler, but I have no problem comparing Hitler to Tlacaelel.

**Consider here the prayer of the Mexica midwife:

Loved and tender son, This is the will of the gods. You are not born in your true house Because you are a warrior. Your land Is not here, but in another place. You are promised to the field of battle. You are dedicated to war. You must give the Sun your enemies’ blood. You must feed the earth with corpses. Your house, your fortune, and your destiny Is in the House of the Sun. Serve, and rejoice that you may be worthy To die the Death of Flowers!

A hell of a lullaby, as the lullaby probably came from hell.  Not too different from the song Roman children used to sing at military festivals, though:

Worth noting is that the Death of Flowers, so far as I can tell, is ending up a sacrifice yourself.  It means you lost a battle but you ended up sacred -- some kind of a silver lining, like the Christians thought of being thrown to lions, or the Muslims think of dying in a battle.

There was a whole war over these so-called Flowers, actually; and in this Flower War the whole purpose wasn't to fill harems, or to gain territory, or to get rich, or to convert a whole nation, but to round up as many people as possible, and tear their beating hearts out.  The Aztecs were both the sacrificers and the sacrificed, and the battle only ended when one side, or both, announced it took enough victims.  The whole region went to hell because of this, and I'm told the style of warfare adopted, intended to capture people instead of killing them, was one reason Cortes was able to kick their asses.  So we can thank them for that.

**It sounds from this essay as though nothing good came out of the Aztecs, but in a whole nation, there's always some gem hidden in the garbage bin.  Nezahualcoytl, the man on the throne while Tlacaelel was running things behind the scenes, wrote poetry about the fickleness of fortune, kind of like Solomon, and was known for being extremely just.  How do we know this?  Of the hundred or so kids he had, several were executed for flagrant crimes --  a good leap, in this aspect of personal character, ahead of King David.