Augustine tells the story of a general named Regulus.  This Roman went to war against Carthage and ended up fighting valiantly; but when he lost a battle he was surrounded by the enemy and captured.  As a prisoner he was given an option.  He was let go on the pretense that he'd go to Rome, use his weight in the Senate to negotiate a prisoner exchange, and when he'd negotiated the prisoner exchange he could go back to his old life with his family.  If he failed, Carthage made him promise he'd return to them as a prisoner.

He went, but once he got to Rome he negotiated the wrong way.  Standing in front of his countrymen, he stated the terms of the exchange; and noting the terms were in the favor of Carthage, begged his fellow citizens to refuse it.  They listened to him, and did.  Then, packing up his bags in the face of adoring countrymen, he walked right out the gates, traveled back to his infuriated captors, and ended up getting tortured to death.  He lost his life and his liberty but kept his dignity. 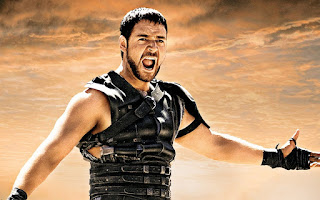 Aside from this Roman, the not-to-be-missed Livy tells us about another one named Camillus.  This general, being sent off to make war with the city state of Falerii, found himself running a long siege.  The Romans at this time were unfit for the long-term strategy of blockades.  Most of them were farmers and business owners; thus the longer a war went on the less likely the Romans were to win it.  Each of them knew that his farm and business were in danger through neglect; and beyond this the Romans were unused to camping in the winter.   Supplies were also running thin, which the people of Falerii knew well and counted on.  So the Falerians tried to drag the siege out, and the Romans were starting to get weary.  It was at this point of possible failure that Camillus encountered a strange man.

This scoundrel, a top-notch school teacher, had been entrusted with the education of Falerii's most important children.  He had a custom, before the siege, of taking the kids for a walk outside the walls; a tradition he continued in the safer areas once the Romans were encamped.  At first the kids were scared to go out, due to the Romans, but the Romans were still far enough away from the walls; so the teacher would walk them further and further out each day -- a little bit here and a little bit there, like boiling a frog.  Eventually the kids became fearless; and he was able, after some time, to walk them right up to the Roman camp.  At this point the Romans surrounded them.

As such Camillus gave the Romans a plan.  They stripped the traitor naked, tied his hands behind his back, gave each of the kids sticks and weapons to beat him, and had the children drive him back to the city gates.  The people of Falerii were baffled, but soon the kids were back inside and explained the situation thoroughly.  The Romans wanted to beat them outright.  They would sit out cold and hungry until they were able to do it.

The Falerians, thus shocked, began to rethink the whole thing publicly.  First of all, what kind of people were the Romans?  Had they been misjudged?  And second of all, could they count on their own people to risk their lives on a point of honor?  After a short debate, they threw open their gates and welcomed the Romans -- not as conquerors, but as friends.  Nobody wanted an enemy who was nobler and braver than his own people.  So they formed an alliance that day, and went on, together as Romans, to eventually conquer all of Italy -- and eventually most of the known world.

When I tell people these stories they always ask me one question: are they true?  Like much ancient history I can't tell one way or another, but the important thing is this is what the old Romans used to teach their children.  I'm told the Romans talked lots about virtue.  I've also been told this is a mistranslation.  We use the word virtue today to mean well-behaved, or wholesome.  The word they used for virtue -- coming from the root word vir, for "man" -- is more accurately translated as valor*.

*Other connotations are excellence, manliness, character, courage, and worth.  Faith, hope, and love are nowhere to be found here.  These are impositions on the already sufficient prudence, justice, temperance, and courage.

As a side note, I was unable to write for weeks and only recently had an inkling why.  I'd been reading too many books by modern men; and the week after I went back to reading Macaulay and Ayn Rand and Cicero I was back in the saddle again.  The problem with the modern scholar is he's all brains and no valor.  He preaches sympathy for minorities too much and whines about the burden of existence.  These days I have to go to dead men to feel like I'm alive.  As such I take modern authors sparingly -- like butter.  After all they seem to be made of it.

Support The Letters by sending a gift to paypal.me/supporttheletters