In defense of Pope Slappy

I'll confess up-front, for the sake of dramatic effect, that I think Pope Francis is a slimeball.  Nearly everything he does in the news makes me sick.  We caught him washing Syrians' feet.  He told us to let them all in -- an act which even the Dalai Lama, out of respect for Western Civilization, is against.  The next he says we can't judge perverts, while likening Donald Trump to the baby-killer King Herod.  He hates the death penalty, and even life imprisonment for murderers. 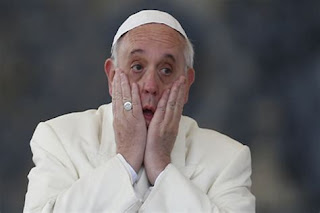 I could go on here, but unnecessarily.  He's for life if you're a lowlife.  If you're doing well, or a patriot, or innocently wealthy, or you just won a war against the Hun, you'll be last in line for a foot washing.  Like nearly all leftist Christians, he says to love your enemy and care for the outsider.  Like nearly all leftist Christians, he forgets that this is subjective, and that the "outsider," the "sinner," the "woman at the well," the person you're "not supposed to judge," is the person you are personally offended by.  He ought to eat his words and wash Trump's feet.

This being said, he did one thing for the best of us this week and got pummeled for it.  A woman reached out of a crowd, latched on to his hand, and yanked it toward her.  This 80-year-old Christ-in-proxy, probably suffering from arthritis, or sleeplessness from selling us out, or exhaustion from kissing the enemy, tried to get his own body back, and when he couldn't get it back, he slapped away like an old woman to get it.  Plenty of remorse was given later, but at the moment his scowl showed an honest respect for his own life.  It was probably the manliest moment of the celibate's entire career.  He couldn't impregnate a good woman, but at least he slapped a silly one.

Immediately the sermons poured in from Christ's body doubles.  "What did Jesus do with the woman who touched his robe?"  "How could a representative of Christ have frowned so badly?"  So on and so forth -- all sermons saying the same thing: that a representative of Christ (as all Christians are, technically) has no right to himself, that everyone in a crowd has a right to grab and not let go, and that the highest office in the world, an office above kings and emperors for over a millennia, exists for shaking hands and kissing babies.  To these saints and geniuses, the higher you are, the lower your job.

The apostles understood things differently.  Right at the beginning of the church they admitted it.  A question was asked about their utility.  Would they, including Peter, wait tables or run churches?   After a short deliberation, using the plain resources of manly logic, they decided to create deacons --  whose job it was to scrub feet, if necessary, and take care of widows and orphans.  Thus time and space had their time and space.  Order was the order of the day.  When in 1st Corinthians, Paul, the man who said "there is no law against love," backed an unwritten law against loving your ex-step-mom, he also insisted on order in churches.  One person would speak at a time.  Three of them would speak in a session, instead of hogging the limelight like a modern-day pastor.  Nobody would cut in line, or get drunk on the sacramental wine.  A failure to obey these orders meant a reckoning with the leadership.  You would fall in line or be kicked out of church.  The "do not judge" people became judges and shunners.  They said harsh things so they could live in a kind way.

What leftist Christians miss is that at bottom, a call to order is a direct product of love.  Love for a message and an organization and the people inside it.  A love of reason and harmony, and the expectations of the good things that come from them.  The idea that within a certain territory, or wherever your people gather, there are going to be good ideas in charge, and that lines are drawn to keep bad ideas out.  Some call this "dogma," or "closed-mindedness," or "exclusivity," or "nationalism," but what it really is is love, and all people do it, because all people need order.  Every church is a little heaven, and every country a little Zion.  This fighting for territory, and then defining what the territory stands for, and fearing your own people could wreck it,and fearing other people from other territories, is the defining feature of humanity.  The people who call it "worldly" aren't heavenly.  What they are is dimwits or traitors*.

This is why I'm defending the slap.  Pope Francis for once is eating his own medicine.  He told us to not judge and then found a behavior his whole being, in a rare moment of honesty, ended up judging.  He had something which was both miniscule and everything and someone wanted it and took it and he took it back.  Some people, believing that Pope Francis belongs to the woman or to the masses, shamed him for belonging to himself.  I think we ought to let him slide.  Aside from the fact that even Jesus went off into the desert to escape the needy, at the bottom of Frank's act was the spirit that gives us law, and borders, and property, and manners -- not a slap on the hand of a woman, but to the face of a mindless suicide**.  The promoters of "Christ's love" gave their sermons to Pope Francis, like Pope Francis gave his sermons to our wall-builders.  We lovers of order give our sermon to the arm-grabber -- as we give it to the border-jumper, to the murderer, and to the socialist.

PS: Am I saying here, that Pope Francis ought to have slapped the woman away?  Absolutely not.  He slapped and I'm defending his right to slap.  He apologized and I'll praise his sense in apologizing.  Not that he needed to, but that he was gracious to.  The bigger question here isn't whether he should have slapped, but why none of the do not judge people had his back from the start.   They tend to show up only in defense of the worst kinds of low-lifes and screw-ups.  You have sex with the neighbor's dog and it's do not judge.   You try to defend your family, or your country, or your business, or your life and here comes the gavel.

*I admit that in every society, a love of order has to be balanced with a love of tolerance.  Shy of this we're all brute force and war.  Kindness and forgiveness are as necessary to society as law and order.  The problem is, there is no clear-cut way to balance them.  It's an art, like raising a kid, or keeping a wife happy.  The champions of order have to put everything in place.  This means excluding people and ideas, often at the point of gun.  When everything's been put in place, new problems will require men to wreck some of it.  Arguments will be given for one rule or another.  Rules that helped one day will menace the next.  A too-strict observance will make good rules look ugly.  Thus you need people to modify them, and take some of them down, and this requires tolerance -- the belief that someone out there, and usually at first a minority, will have to fight your system, on some level, and that the changes that save you could come from an unseen direction.

On the other hand, a too-free hand with respect to the your rules means anarchy.  It means your house gets filled up with traitors and criminals.  You interpret the laws too loosely and the laws lose their meaning.  You allow too many of the wrong kinds of minorities and suddenly you're living in someone else's country.  No persecution means someone turns their guns on you first.  You have no respect for your country and suddenly someone comes in with a hostile idea for your country.   Disorganized, unpatriotic people, who believe diversity is a principle, and have no respect for their ethnicity, are only waiting in line to be replaced -- by people who believe the opposite.

I remind you that when John Locke wrote A Letter Concerning Toleration, he had a notable exception.  The Catholics weren't given the same civil rights as the other Christian non-conformists, not because Catholicism isn't Christian, but because good Catholics, in his day, were bound to the Pope and not to the king.  As such they were serving a foreign power, and couldn't be trusted to serve the domestic one -- a fine distinction, which ought to be applied to anyone who believes in Sharia Law.

**The ugliest passage in the whole Bible is in James.


Therefore to him that knoweth to do good, and doeth it not, to him it is sin.

What this means is that if you have an imagination you're effectively a sin criminal.  It means that everyone has a right to you but yourself.  To remind myself I'm a free man, I like to sit down, think of all the good things I could do, give them the middle finger, and go right to bed.  I believe strongly in James's faith without works is dead, but I leave the do-gooder passage to slaves and to suicides.