I don't know too much about Dorothy Day, but from what I just read in The Atlantic she was a jackass.  She hated that people owned property and ran businesses, and was a pacifist during World War 2.  She founded some 200 such Dorothy Day Houses for the "chronically unwelcome," and spent the latter part of her life channeling resources not to the lovable urchin, or to the good man down on his luck, or to mothers who got cut down by cancer, but to people she personally described as "terrors"-- who were likely to burn down her buildings, to punch her in the face, and call some innocent black man the n-word.  It's said she was an expert at picketing.


She wasn't always this horrible, of course; and her biography, The World Will Be Saved by Beauty, is an account of her exploits from bohemianism to communism to Catholicism -- each snowballing into the next, and the last part being more destructive to our nation than the first two.  Were any of her "unfortunates" converted to lives of piety?  Who cares? says the reviewer.  She viewed the cosmos as radiating with the light-beams of God's love, and thus spent her time loving everyone but everyone who earned it. 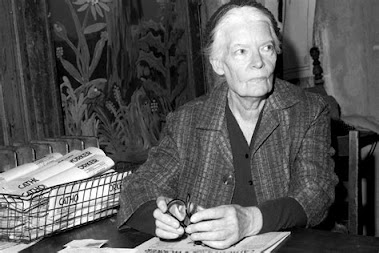 The psychology of her stance is both logical and insane.  The God of the heavens loved her while she was whoring around, fighting her husband, getting divorced, slitting her wrists and aborting her children.  She was given this deal so she cut one for others.  The uglier they were the more she had to love them.  In fact she could only know she loved them when they were ugly.  She read that parable of Christ's where the ruler forgave his steward for big things and the steward didn't forgive his servant for little things; and knowing what happened to that steward (he was tortured probably to death), and hearing Our Father was going to do the same to us (Christ's words, not mine), she decided to not get tortured for eternity.  She had no ground to stand on so she took others who were too drunk to stand.  They offered nothing and she offered everything.  They made our world a worse place and she offered to make their world better.  This is called the Catholic "preferential option for the poor."

The people who take this stance always forget one thing.  If the God of the Bible exists, He not only has the resources to do anything, but He is the resource.  God not only knows the people to save, He knows which ones He can save.  He has all the time in the world because He created the world before time.  He begins things because He always knows the end of them.  He can "throw Himself away" on hopeless causes because no cause to Him is hopeless.  Dorothy Day, on the other hand, is finite and mortal and can't predict the future.  Thus Dorothy Day can be wasted -- and this process of wasting, according to the elect, is her "honor."  In fact the further she wastes herself the more honorable she is.  What good is her mind for?  Nothing -- so long as she "has a heart."  I don't know what everyone else thinks, but to me this makes her a giant dick.

To this brand of pathological do-gooders, the bum, the menace, the terror's existence is simply what it is.  The rest of us, to achieve sainthood, are told to live for him.  We have everywhere to go and everything to do.  The bum has simply to keep being a jackass.  Does God throw him in hell?  We aren't told; but if we don't do everything to make his life on earth a heaven, God will supposedly throw us in hell.  This is called a philosophy of uplift.

No mention is made of what we miss by being "saintly."  That instead of spending our time with a wretch we could be spending more time with our kids.  That instead of paying for ugly things we could be buying art from Michaelangelo and thus keeping him in business.  A man builds homes for us to live in and we're supposed to ignore him.  A man ruins a neighborhood and we're supposed to give him a home.  We turn the cold shoulder to our heroes so we can uplift the villains.  We had time -- precious time, petering out every second and lost for eternity -- to love someone beautiful, someone honorable, someone brilliant, or stylish, or just, or prudent, or admirable, or dependable, or funny, or chaste.  Real heroes, big and small.  Beautiful people*.  But we spent our short lives on the gutter because we were worried we might end up in a fire pit.  We were told Heaven was full of good things.  Then some of them showed up on earth and we chased them, and we were told because we chased them we could never be saints**.

PS: Dorothy Day had some idea that what she was doing was stupid.  She wrote in her memoir Loaves and Fishes,


"This turning the other cheek, this inviting someone else to be a potential thief or murderer, in order that we may grow in grace—how obnoxious. In that case, I believe I’d rather be the striker than the meek one struck."

After reading many articles on her, this is the only intelligent thing I'm aware she said.  You may compare it with this statement from the magazine she founded, The Catholic Worker:


"Houses of hospitality are centers for learning to do the acts of love, so that the poor can receive what is, in justice, theirs, [emphasis mine] the second coat in our closet, the spare room in our home, a place at our table. Anything beyond what we immediately need belongs to those who go without."

If they had possessions, I would rob them out of principle.

*Every so often I renew my old Christian prayer that God make me into something beautiful.  Not quite useful.  Rarely do I ask to even be good.  Just beautiful.  Something worth watching, or starting in awe at.  A work of art.  God's Sistine Chapel.  To me this encompasses everything else, and acts as a shortcut.  I used to pray to be good, but I tried being righteous and quite frankly I'd rather have friends.