In defense of Rep. Ilhan Omar

The great question facing every American Muslim is which foot do I shoot myself in?  You have to pick a political party at some point, and on the one hand you have the party that invades all your brothers and sisters, comes up with things like waterboarding and the PATRIOT Act, hates to see hijabs, blew up the Middle East, and is now refusing your refugees.  On the other hand you have open arms and a rotten soul.  Hollywood and the music industry in all their filth.  The gay lobby.  Feminism.  Fans of Lady Gaga and enablers of junkies.  They'll draft laws against hate speech and blasphemy but they'll tell your boys they can change genders.  On the one hand you have someone you respect who doesn't love you.  On the other someone who loves you but you just can't bring yourself to respect.


Representative Ilhan Omar picked her side probably because it was an easy in.  She's brown, first of all, and female, and Muslim -- which means she can be dumb as a post and the liberals will vote for her.  She has only to marry a woman if she wants to be worshiped like a goddess. But what we now know is the Democrats won't swallow everything.  Once you as an American Muslim join a party you have to wall a whole side of yourself off.  You have to tiptoe through your own team's minefield until you begin to question who you really are.  It's true for everybody but it's especially true for Muslims.  To win in politics, in a free state, is to have the broadest possible appeal.  Can anyone do this and remain true to herself?  Can any Muslim woman do this in America and still keep a shred of self-respect? 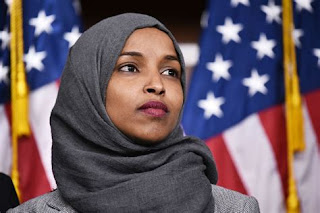 Ilhan was true to herself in one area and it backfired.  She was a pet minority and she criticized the richest pet minority.  In fact she told us what we already knew: that AIPAC, a Jewish PAC created for the sole purpose of influencing Americans, had an influence on Americans.  That the Jewish lobby, as all lobbies wish for themselves, had money and bought people.  She questioned whether, as a member of the US House of Representatives, she had pledged allegiance to the USA or a foreign country -- which is a noble thing to ask, I think.  A tweet was found from 2012.  What did it say?  That "Israel has hypnotized the world, may Allah awaken the people and help them see the evil doings of Israel. #Gaza #Palestine #Israel."

The backlash was immediate and overwhelming.  Democrats and Republicans came together in a rare act of unity and demanded an apology -- which was given to no avail.  Juan Vargas, a representative from the state of California, said that questioning the US-Israel relationship was "unacceptable."  She was denounced for "blatant anti-Semitism" and "anti-Semitic tropes."  The president can question NATO but nobody can question our commitment to Israel.  The question is, why?

In truth I love Israel because I have to.  Not because anyone told me to, but because it's the closest thing to America we've got -- in the national sense, a little brother.  Our countries were founded in much the same way.  Some hearty and hard-working people had a hard time in other countries.  They found a spot where the indigenous people were backward and indolent, and moved there en masse, by war and purchase and treachery, until they owned the place.  What did they make of it?  Something bordering on paradise.  Where people of genius could flourish, and families could be fed by their fathers, and people of fair skin and old creeds and hip ideas could mingle in safety.  Palestinians turned a garden into a wasteland and Jews turned a wasteland into a garden.  The Indians, killing each other off and refusing to build things, had left America a wilderness.  Americans united and turned it into a great nation.

Despite this, to say Israel is a scandal is an understatement.  It was made desperately by desperate people, and their acts of desperation often border on what we call "terrorism," and "ethnic cleansing."  Daniel Gordis, Jewish author of the must-read Israel: A Concise History of a Nation, states that The Jews of Europe and Russia had been brutalized by pogroms.  In many cases their property was confiscated, their women were violated, and their good men were murdered.  Russia was falling apart (no thanks to Jewish socialists*), and Europe was turning more hostile by the hour.  The question on every Jew's mind was, where can we go?  Europeans didn't like them and wouldn't take them.  America took a large share of Jews, but it wouldn't take all of them; and not all Jews, due to ideological differences, wanted to go to America anyway.  Jews were at one point considering Argentina when Theodore Herzl asked them a crucial question.  Why Argentina, when we have the land of Moses and David?

Let the kikes to go to Palestine, Kaiser Wilhelm II said.  And Jews did.  A mass conspiracy was devised.  Rich Jews began buying Palestinian land legitimately and with a purpose.  The locals at first were selling but eventually they got skittish.  More Jews were moving in and the demographics were starting to change drastically.  The British, in charge of Palestine at that point and fearing mass Arab riots, tried to stop the flow of Jews; but the Jews kept sneaking in until riots finally erupted.  There were mobs and street fights and people were killed.  British officers were assassinated by Jews.  Buildings were bombed.  Arms were smuggled in by the boatload, bullets and bombs were made by kibbutzes, and the Jewish people, who had nowhere else to go, were fighting a war for their very existence.

The outcome of this invasion is what we see today.  A place where liberty flourishes though surrounded by despotism.  A place where no constitution exists because the people are in a state of almost constant emergency.  Acts of terrorism committed against the children of Jewish invaders.  Walls built to keep Palestinians out of Palestine.  More companies on the Nasdaq than all of Europe combined.  A place where beautiful women can go without a head covering or a male guardian, where school teachers carry assault rifles, and where all children eventually go into the military.  What kind of place is Israel?  The most beautiful, successful, precariously placed place in The Middle East -- to white Americans.  A tragedy, a terror, and a robbery-in-progress to the people of Islam.

As such I don't blame Ilhan for her position.  She can't put herself in the Jews' shoes because she's already been fit with the Palestinians'; something everyone of intelligence already saw coming.  But what are we to make of Americans?  They won't defend our borders while both parties defend the Israeli ones.  They require allegiance to the Jewish lobby but can't handle respect for our Southerners.  You can hate Christians openly and still keep your job in Hollywood.  But can you question our alliance with AIPAC?  We ought to keep the Jews, I think.  But more than the Jews we ought to be unanimous in keeping ourselves.

*One thing that almost no Americans know is that Soviet Russia, despite Fiddler on the Roof, was one of the original supporters of the Israelis.  They thought the Jews, being socialists, would make Israel socialist.  But I don't believe anyone who was watching Israel at that point knew how it would turn out.  Their Founding Fathers were a volatile cocktail at best.  Theodore Herzl, the founder of the Zionist Movement, wanted a secular state.  Ahad Ha'am didn't want a state at all, but a spiritual and pacifist center.  The Ultra-Orthodox Jews wanted a state and they wanted it religious.  Berdyczewski wanted a revolt against Judaism in general.  Max Nordau, sick of seeing egghead Jews bullied into ghettos, wanted Jews to be brawny, and war-hawks.  Jabotinski took it one step further, and created insurgent training camps all over Europe and Palestine.  A.D. Gordon believed the new Jew ought to work the land, and ended up starting the Kibbutz movement.  Others wanted industry.  Some Jews envisioned a state without Arabs.  Others believed Arabs should share the state with them.

The result was a miracle by any standards.  Out of all these forces they not only got a viable state, but the most highly successful state in the region, and, considering their difficulties, possibly in the world.  A part of this, I believe, was a matter of reparations from Germany -- which Ta-Nehisi Coates covered, meaningfully, I think, in We Were Eight Years in Power.  Another part was assistance from Americans.  But the main reason they survived was pure fear.  Diversity works best when you're united by danger.  The Israelis did it because they were surrounded by Arabs.  The Democrats can do it, despite being filled with gays and Muslims and Feminists and Mexicans and socialists and millionaires, because the big media spends all their time making white people the bogeyman.

Support The Letters by sending a gift to paypal.me/supporttheletters