On the two party system

Aside from the fact that nature Herself is comprised of opposites, such as light and darkness, cold and hot, and wet and dry, and neither of these opposites can exist without the other, any measure you put forward either gets a yes or a no, which means there is always a for and against.  You can name ten parties in a system and what eventually happens?  Put something to a vote and they form blocs, and whoever has the majority wins -- not ten parties, but two.  Ten is the name and two is the substance.

One advantage of a multi-party system is that more people can express their ideas more clearly.  Thus instead of cramming millions behind a flag that barely, vaguely, loosely represents their ideals, you can be specific -- a policy which means, maybe locally, they can have leaders they believe in, and real representation, and a platform that excites them.  But on a large scale this close representation is impossible, and even if they get a small-scale party they like, the large one they mesh with will be a disappointment, and probably even offensive to them in many ways.  A truly one-world democracy is a government for nobody. 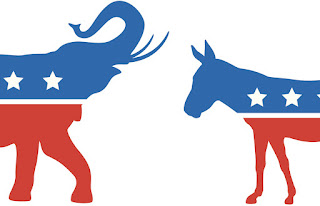 But large parties eventually become necessary.  Even if there are technically no parties, and people vote on single issues instead of on platforms, people will need to work with people.  There will be some people who share similar values and others who don't, and people will quickly find out who's likely to work with them and who's likely to stand in the way.  A person who lines up in many ways with another will start working with them to get others to vote with them; compromises will be made with those on the fence; handshaking will become a habit and people will begin to rely on allies, and before long, you'll have what effectively becomes a party system anyway.  If parties are officially banned, a platform will be adopted unofficially.  It will become known to those on the inside of the political game, and mysterious to everyone outside it.

The politicians who refuse to play by these rules in a large country, idealists who believe in politics without a machine, will be shut out, and their constituents will vote for somebody else -- who will form platforms, and machines, and maybe have a chance at winning.  The more idealistic the politician, the more narrow his views, the less he's willing to compromise what he believes in to get some of it done, the less likely he is to win.  What he needs is a majority -- the minimum amount of people required to win, at the maximum amount he can possibly stomach compromising.  To go beyond this point is to risk vagueness in policy, and thus disappointment in practice.  I doubt anyone in a large country can hold the line with a 70% approval rating for too long -- unless there's a war going on, and the party in power happens to be doing a great job fighting it.

This means every country needs to have an enemy if it wants to stick together.  When you're up against Soviet Russia, for instance, or Nazi Germany, it's easier to rally big-tent parties, because what's different about your neighbor is generally less threatening than what's different about a foreigner.  But a country without an enemy becomes its own enemy.  Suddenly the only fears it has comes from its own constituents.  Their plans, which seemed miniscule and even petty during a hot or cold war, become grandiose and diabolical in the new post-war perspective -- the idea of survival and national freedom, both simple concepts when weighed against foreign infiltration or attack, become matters of how we survive, and what freedom means, which are much more complex, and vary wildly from person to person*.  The neighbors' habits, his styles, his preferences weigh on you heavily; one neighbor tries to push his agenda on another, and suddenly you find out the Soviets you feared yesterday were in-house.  In our case they are -- and worse.  But we didn't feel this when we kept voting for FDR.

Get my free ebook essay collection by emailing me at letterssubscription@gmail.com!
Start your subscription today.
Support the Letters by sending a gift to paypal.me/supporttheletters or www.venmo.com/TheLetters