One great irony of being human is that small talk is hard work and talking heavy is great fun.  Small talk is either foreplay or outright avoidance.  A no-man's land of the soul, or maybe a demilitarized zone -- barbed wire up and land mines galore; a tip-toeing around the true-self and a putting on of costume.  People are very bad at it because (thank God) they're very bad at lying.  It takes too much imagination to be a small talker -- to talk about things you don't want to think about and in truth aren't interested in.  You have to think first of all about something that's neutral for at least two of you.  This means on some level you're afraid, and that you don't trust the other person; but you can't show it.  So the longer it goes the more nervous you get.  The more chance you have of slipping up and looking bored; or that the tip-toeing goes wrong and you run into a land-mine; or that you run so far and so long into banality that you wonder if the other party wants to ditch you. 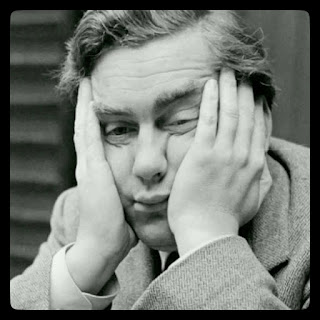 And of course this is possible, because the longer you stay banal the more you already hate yourself.  We tell ourselves we want to get away from the small talkers but the truth is we want to get away from this "false us" as much.  There are so many things that are the real you, of course; too many things that are beautiful and important that you've chosen to throw aside out of politeness -- who wants to hear what you really love and hate?  Or what's really tearing you apart?  Or do you want to hear what they have to say?  No -- we just met and defenses are up: true loves turn into comments about the weather; sports talk reigns supreme where men are too chicken to talk divinity*; and people stay away from parties because being alone means they at the very least least have themselves.

There are people out there, of course, who are desperate to hear about the real you because it means they can talk about the real them.  But finding these people is a matter of chance.  Every person we meet is a mystery to be solved; a true-love in disguise or a wolf in sheep's clothing.  We make too much of beauty when a good personality, many times, wins in the end.  We get past facades and learn who in the long-run is really useful, or kind, or brilliant, or funny.  But this all takes time, and beyond time takes risk.  Thus the longer you've lived in one spot the more risks that you've taken.  You've been digging for years and you've got lots of gold.  The bad stuff you've tossed aside; and the long days of sifting have paid off in comfort -- like going to mom when you know dad won't give in; or going to dad when you know mom just won't know**.  At this point people are a treasure, and leaving them behind means you're back to tip-toeing through the minefield.

I've had two years of almost leaving Seattle and these are the thoughts I've gotten from it.  I believe that many places we go we can meet someone special, and that every stranger means a possibility.  I've met men who acted on this, and because they made strangers important they became important.  But who really wants to uproot?  I love the good people I have****.  I love knowing which people to avoid.  I love being myself, and I hate making small talk.  I don't want to leave -- but Sodom is expensive, and it's a terrible place to raise children.

*I believe shmoozing is a great talent, and one that's hated rightly.  Who has the audacity to yap hours on end and seal the deal?  It's an art form that's paid well because it requires great acting -- a lot like being an highly-paid actor, in fact.  But even more than this it requires great perception.  You have to be great fun dancing around trip-wires.  You have to have a sharp eye for signals and and a good ear for catch-phrases.  You have to appear accepting and like you're entertained constantly.  You have to be nimble and quick in the neutral.  People see this and know it's lying and they don't see any callouses on your hands and they think you're a scoundrel***.  And I suppose if you're well-paid for it you are.  But can any great business get too far without schmoozers?  So what if you might have a great deal if you can't bring yourself to cut one?  The cogs of the world are turning on soul-grease.

**One great tragedy of motherhood is that boys, as they get older, start turning to their father.  She may have nursed them from the first day and dressed them and changed them and sang; and he may have been off making a living while she was right there alongside them.  But a woman pays dearly for loving her kids.  They've seen her at her worst too many times; and the father, being gone, in many ways turns into an ideal.  But beyond this as they get older they need worldly experience -- something the father more likely has in spades, and which the mother, having spent all her time on them, has been neglecting for decades.  I don't know any man who prefers talking to his mother about politics, or religion, or women, or business.  I don't consider a man "grown up" unless these are the things he likes taking about.

Beside this I believe men and women develop differently anyway.  A woman leaves man in the dust until maybe about eighteen.  If they're both twelve years old she's probably his superior.  But his reliance on the left side of his brain means he's a work left in progress.  If he refuses to build himself up she'll always leave him behind (which is why men have more dunces than women); but if he's training himself she'll be no match for him -- later (which is why women have less geniuses than men).

A reliance on the logical side of the brain means you take more time to mature.  It means, in effect, that you're better at solving puzzles, but at a young age you don't have all the pieces.  You need knowledge to grow all your wisdom.  As those pieces are collected, a man starts putting things together in ways most women don't.  Not that many women can't, but they don't.  She reads novels and he reads history.  She likes her news gossipy and local, he prefers his to-the-point and relevant.  When children get older they need more than just comfort and coddling -- they need brutal, straight-forward know-how.   They're leaving the environment of the home, and they need somebody to guide them who's been living beyond it.  The motherly act of sacrifice is the reason her children leave her.  And, of course, if a woman leaves her children to daycare she throws away the full experience of being a mother -- alongside the right development of her children.

If a woman wants to hold on to her boys, I suggest that in her spare time (if she has any) she reads serious books.

***The ancient Romans loved honesty so much, they barred all their actors from citizenship.  Quite frankly I don't think they thought this one through.

Schopenhauer, far less manly but more perceptive than the Romans, noted that in their dealings with others, people are like the moon, or like hunchbacks: they only show you one of their sides.  Actors may act for a living, but so does everybody dealing in customer service.  Nobody is really himself at any point -- and we can thank this fakery for the existence of all manners, commerce, and civilization.

****The question in all of this is, how do you find a good friend?  The answer is just as much kindness as bravery.  Kindness, which is most often lauded for friendship, will get you any old fool.  Bravery will get you your kind of fool.  Put yourself out there, and your tribe will find you first.  As the Romans used to put it, fortune favors the bold.