Selling us out: America's problem with businessmen

The history of the body positivity movement can be boiled down to this: there weren't many fat people and then there were lots of them, and when the people with lots of money realized the people with lots of fat could make them even more money they hired Meghan Trainor to sing about the greatness of fatness.  She hit the jackpot and other people wanted to hit the jackpot, and now every clothing company is putting landmonsters into magazines*.


There are a lot of people who complain about capitalism being undemocratic, but I think this proves capitalism is the most democratic thing we've got going.  Socialism at its best means the majority tells you what you get, and at its worst it means a minority does.  And if we consider the matter soberly, the only way we can have everyone vote for anything they want and have it count is if they've got dollars and freedom to do it, and alongside this other people have the freedom and the means to supply it.  As such democracy doesn't mean the best things will win, and neither does capitalism.  Capitalism is a mirror for reflecting our private desires**.  It means that if the country's full of fatsos the market will reflect it; and if the fatsos want to see fatsos sing about being fat then by golly they'll get it.

This fact of capitalism being known, after he's found a product or a service that people will buy, the second job of the businessman (if he has any brains) is to keep himself not on the right side of history but on the right side of democracy.  The easiest way to do this is to keep your mouth shut, which is what most businessmen usually do; but if they believe they've got their fingers to the wind and they see which way the lemmings are running for some particular moral du jour, some of these businessmen will try to make a statement.  A few of them will actually be principled and go down in a fight for something sensible, but the majority will do something so trendy, so spineless, and so fortuitously lawful that their "stand" will be against someone who has already lost, and against principles which are already practically illegal.  To any common observer this isn't "taking a stand" but outright conformity.  To The New York Times it's something that borders on heroism.

In their latest and greatest piece of moral obfuscation titled The Moral Voice of Corporate America, The New York Times has praised a host of C.E.O.'s who've done nothing other than cover their own keisters.  It's plainly obvious that anyone who runs a major corporation can be taken down by law, despite having a business beloved by millions, for offending or not promoting a few protected minorities.  This unavoidable and completely harrowing fact is responsible for a slew of corporate diversity seminars and a business culture so cowardly that the speaking of general ideas in any way related to race or religion or politics or country of origin or sexual identity -- in other words, in almost every important area of life -- is practically verboten, unless of course you're speaking favorably about somebody already protected, or shouting down someone you believe to be speaking against them.  This total ban of intelligence is known as a culture of inclusion, and it is enforced by Human Resources officials as intolerant as the Cheka, and by informants as invasive as the Gestapo.  Free citizens have a First Amendment.  Businesses don't, and they can be sued up the ying-yang.  Therefore we put the citizens in a business, and by sleight of hand the citizens effectively have no First Amendment.

What The New York Times miraculously failed to mention is that this censoring machine exists for the sole benefit of the companies, and all these corporate "heroes" have done is put their foot on the pedal.  They used this machine to run over the president as soon as his polls were down and supporting him placed a "free citizen" in its path***.  They sang out with one voice on the one thing they were required to sing in one voice.  They didn't sing against Hollywood, or the university system, or the polls or against the law or against even our worthless musicians, but against any thought, any speech, any appearance of nonconformity to the belief that "our country's strength stems from its diversity" (Merck), that Americans welcome a browner America but not a whiter (Pepsi), and that "the equal treatment of all people is one of our nation's greatest principles" (JP Morgan). 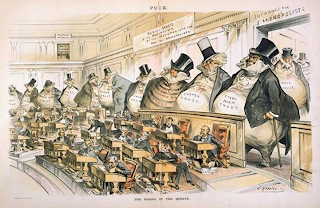 They haven't proved how treating all people exactly equally is desirable or even possible.  They haven't explained how making America one color makes us more moral than making it more of another.  They haven't explained how everyone being totally different is supposed to make us stronger, or been honest that there are certain kinds of differences that they find absolutely intolerable.  But this is what they say, and if they don't say it loudly and constantly and religiously then their knees knock for their mega-yachts, and the pitter-patter of the Twitterati sounds to them like the rumblings of the invading Hun.

This is the culture our civil rights legislation has made for us and our businessmen have endorsed for the money.  A culture of absolute moral abjection.  A mindless, unprincipled morass of goosestepping and groupthink.  A corporate world more plastic and banal and soulless and moneygrubbing and morally corrosive than any institution ever before it.  They ship their factories to Lesotho and ruin the environment there and pay the blacks nil and then treat them like garbage.  In America they lock arms and tell us, with smarmy faces and slippery words, that they love and treat everyone equally.

The New York Times believes these people are praiseworthy.  They think heroism means fighting a fight you were ordered to fight for money and can't lose, for principles you don't and won't and can't keep.  America, here are your principled corporate businessmen.

*Some clarification may be necessary as to the definition of "a landmonster."   Whatever the definition of "fitness" is today, I've dated a couple of skinny girls and (with an occasional exception) they really aren't for me.  Gisele is way too thin.  Liris Crosse is way too fat.  Whitney Thompson and Iskra Lawrence are two "plus-size models" and in my opinion about perfect.  And although I'm a man and that means I adore many bodies that aren't Iskra's and Whitney's, too much skinnier or too much fatter and the whole thing is ruined.  Variety of course is the spice of life -- but nobody has ever said that dirt was a spice, and beyond this nobody ever said that you should only eat spices.  You go too skimpy and your food becomes bland.  You go too rich and the plate makes you sick.

**A little bit of self-loathing goes a long way. In truth there are few things that are worth hating as much as a person who believes he's entirely worth loving. You don't have to hate everything but you have to hate something. It means you have an imagination. It means you can get better. On the other hand a person who loves himself entirely can never fix a part of himself even partially. He has nowhere to go because he has nothing to dream. His soul is buried along with his brain.

On this note: in one of the the dumbest and most immoral things I've ever seen, Dove, a soap company, stated in their commercials that beauty standards are a form of bias.  This goes to prove what we already know about clinical narcissism: that it is never actually neutral.  A person who's totally in love with herself won't allow you to love anyone else more.  She claims this makes her a feminist.  Spiritually she sides more with the rapists.  She knows what you love and forces herself on you anyway.

***This leads me to wonder what the papers were saying in Germany when the businessmen took a stand against communists -- by joining their hands with the Nazis.