Tying the knot and finding a mistress

February 11, 2022
Dear H,
Tolstoy says in Anna Karenina that the Russians were having a sexual revolution.  It was actually more like a marital revolution, but I say "sexual" because in Christendom, as in most places around the world, sex and marriage are inseparable, and the rules for having sex change wildly once you start messing with weddings.
But it was also a parental revolution.  Tolstoy says that the old Russian way of going about marriage was by having the parents hire a professional matchmaker.  That was under siege back then, and the lack of a general standard left everything in confusion.
There were models to pick from.  The parents in France picked their children's spouses for them.  The youngsters in England picked the spouses for themselves.  The first was about convenience and the other was about love and both of them were considered barbarous to Russian parents.  Which path were the Russians supposed to follow?*  Whether either of these was more "successful" was anybody's guess, and depends on what you consider to be success in the first place.  But one thing is certain, and that's that French people have been known for centuries as cheaters.
Montaigne was the first man I ever read who confirmed it.  He believed (as a nobleman of the 16th century) that women were morally inferior to men, incapable of keeping their legs shut, and that they forced their husbands to care for other men's babies.  If this is true and French men were so upright, I wonder, who were the women sleeping with?
But this matter of fairness is almost beside the point.  The English had taken the opposite policy of matchmaking and, at least in the middle classes, their marriages were taken seriously.  If you really picked the woman you marry and you do it for love, who could possibly trust you if you cheat on her?  You said all the sweet things and the vows and now she's had your children -- society has no choice but to consider you a bastard if you're out there making bastards**. 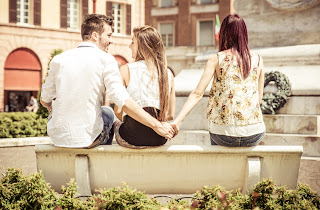 The French on the other hand were sensible in their own way, and made the most of what they had.  If marriage isn't for love then you have to find love outside marriage -- a reasonable proposition, in the end, which justifies "cheating" on someone you never picked in the first place.  Thus romance and marriage were two different affairs altogether, for most, and if you strayed to someone you actually felt things for, probably another married woman, then good for you***.  Just keep your home intact and love who you love discreetly and everything should be fine.  Theoretically, at least.
What the outcome of the Russian policy was is beyond me, but we know the Arabs hoarded lots of women in the seraglios and left gangs of poor and horny men roaming around the cities -- which probably resulted in the niqab, and an undying reputation for sexual harassment.  And the Indians?  Many times arranged marriages, even today -- but no word yet, at least in my corner, of whether this policy led them to being famously rakish on the internet.  Either way it seems that how you get into a marriage determines how you love outside of them -- and beyond this how you think of women in general.
Yours,
-J
*Tolstoy writes in the 1870's of the culture wars,

She could see that lately social customs had changed very much and a mother’s duties had become still more difficult. She knew that girls of Kitty’s age formed societies of some sort, went to courses of lectures, made friends freely with men, and drove alone through the streets; many no longer curtsied, and above all every one of them was firmly convinced that the choice of a husband was her own and not her parents’ business. ‘Nowadays they don’t give us away in marriage as they used to!’ said these young girls, and even the old people said the same.  [...] But how a girl was to get married, or how a mother was to get a daughter given in marriage, no one knew.
Everyone with whom the Princess discussed the subject said the same thing: ‘Well, you know, in our days it is time to give up obsolete customs. After all it’s the young people who marry and not their parents, therefore they must be left to arrange matters as they think best.’ It was all very well for people who had no daughters to talk like that, but the Princess knew that intimacy might be followed by love and that her daughter might fall in love with someone who had no intention of marrying or was not fit to be her husband. And whatever people might say about the time having come when young people must arrange their future for themselves, she could not believe it any more than she could believe that loaded pistols could ever be the best toys for five-year-old children.

Proof that even the days we look back to, believing them safe from moral chaos, Change, the god that won't quit, was wreaking havoc on our expectations -- but that He leaves parents scared exactly the same.
**It should be noted that despite such a drastic difference in sexual mores and marital laws, France and England were both booming countries, highly advanced, and for many years each others' rivals.
I doubt you can do sex any way and walk away unscathed.  But as long as marriage survives, it seems the country does too, even if countries take opposite stances over how exactly to get it done -- and whether you can stray from it.
***Affection is tricky, and hard to earn, and easy most times to lose.  For some of us it involves the way you look -- which can change, and eventually for the worse.  For some of us it involves charm, or the way we behave -- an act which is hard to keep up when we have so many different emotions, and each day throws different problems at us, and so many different interests.  For most it involves what we provide -- hard work, in most instances, and riches or safety in others.  Either way, earning affection is personally expensive, and each of us is changing, and going through different struggles and phases and discoveries, and if we're one way one day you can count on us being different the next.  Not entirely, but in lots of little ways.
Aside from this the people we love change too.  This means that maybe their tastes change, or maybe they get tired of your schtick, or they take you for granted, or maybe you did too much for them and now they owe you and they don't want to be around you anymore -- each of them possible, and each of them likely.  Affection means what you have to offer is what somebody else that moment is buying.  There's no rule you can slap on it, no institution to safeguard love and keep it alive, no one-trick pony that works all the time with everybody.  To keep people you have to be nimble, and attentive.  You have to want to grow with them, and to keep trying to please them, and to love them as much as you want them to love you, and even this isn't a guarantee of anything.
For this reason some men give up on love and recommend fear.  Machiavelli says in The Prince that a ruler can't be loved by anyone for too long, but they can always be scary.  Fear is something you can control.  It means that you'll lash out if you don't get what you want, that you can hurt people if they cross too many lines, that people will stick close to you because not being on your side is more painful than being on it.  This is how the law has functioned, and how it functions now, and how it will always function -- not a carrot on a stick, but a bat with nails in it.
Of course this requires much less hard work and talent than coaxing the good out of others.  But is this approach good for anyone -- other than the law?  No, but still Machiavelli's point stands: that between being loved and being feared, being feared is easier.  People forget the good you do them, and, being a finite being with limited resources, you can't do good to everybody, and you certainly can't do it all the time.  But given enough power you can at least scare them.  We are often more afraid to lose things than eager to gain.
When the Catholic church made divorce nearly impossible, what was once a necessary roughness toward a few psychotic pan-throwers and monkey-screechers became the modus operandi towards the undeserving majority.   Like the welfare queen, the lazy husband -- probably always the majority, as most are when they're guaranteed anything -- was given a choice between hard work that pays well and the easy way that barely holds things together.  The state gave him a green light for the easy way, and, having a clear advantage in fisticuffs, he took it.
What is Surah 4:34?  A policy we make fun of the Muslims for, but only recently abandoned ourselves -- and which we had taken full advantage of, in Christendom, for centuries.
***It should be noted that now, when French youngsters can pick their own partners, most of them still cheat -- proof that even when good reasons are gone, old customs die hard.  According to Business Insider, fewer than half the French find cheating "morally unacceptable," and 63% of them believe you can still love someone who cheats on you.  In this matter, that makes them the most forgiving nation in the world.
Subscribe by emailing letterssubscription@gmail.com and get my free essay collection!
Support the Letters by sending a gift to paypal.me/supporttheletters or www.venmo.com/TheLetters