A whole bunch of things pop into your head when you're about to save a woman's life.  If you can't see her, but you can hear her screaming, you wonder (as a man) if she's beautiful.  This one is automatic and irresistible, as the picture we have of woman "in general" is always sexual in nature, and we're always sizing up women against it*.  Second, you wonder if you'll get a great story out of it, and the other women will think of you as a hero, and a protector.  Third, the fear kicks in and you wonder if you should go at all -- and if you decide to not go, whether you can live with the fact that you let a woman get killed, or raped.  You have a picture of her in your head, but what about what she's up against?  Is there one man or more?  Is he just a man or a monster?  Are you even good at fighting?

All of this happens immediately and almost imperceptibly -- at the same time, and with a corresponding feeling of confusion.  There's no string of words like the paragraph above, no lining things up in order, no reasoning.  It's all at once, and it's do or don't.  No time to think it through.  Whatever your natural instinct is comes gushing out, and you find out at that moment what you really want in life, although you have no idea what it is until later.  I doubt, due to imagination's messing with memory, that we even really know it fully then.

Anyhow the sun wasn't even up when I heard the scream.  I'd been sitting in my room reading Augustine or some other nonsense when my ears perked up and I set the book down.  A blood curdling scream.  Not a cry for help, but a primal yell.  Did I just hear what I thought I heard?  I paused there in my room and listened again, this time intently.

It felt like minutes had passed at this point.  The rain outside was light but steady.  Other than that it was silence.  Then I heard her again -- another scream -- and I dashed toward the door in my boxers.  The nearest thing around me was a hatchet, so that was picked up as I scrambled.  Sneakers slipped on and off I ran into the darkness.

The first problem I ran into was that it was dark and I was in the middle of an apartment complex.  The buildings were large and I was surrounded by them, so there wasn't anywhere to look, really.  I had some general idea of where the sound came from, though, and so after a quick pause I took off running in that direction.

The road.  It must have come from the road.  Out past the building, hooking a left and going for it.  Another scream.  This time I had a location.  Rain hitting me in the face and boxers being put to the test.  I gripped the hatchet tightly and it swung back and forth as I ran.

The good news was that I was in time.  The bad news was that it was a well-timed joke, and I was the punchline.  As I rounded the corner, half out of breath, I realized there wasn't a man and a woman, but two women at a bus stop -- two teenagers, actually, and one of them was laughing.  I paused and wondered at first if I was in the right spot.  Really sat and thought things through there.  A great place for a think.  With boxers and a hatchet.  In the near dark.  Staring at two teenage girls in the rain.

I didn't end up talking to the police that morning because the police weren't called -- on me.  The neighborhood wasn't bad, but it was weird enough, apparently, for the two girls to stop horsing around and give me a look-over.  Who's that?   As If I'm the freak here.  Your hero, you ungrateful skank.

I think of this story every so often, and usually when I'm trying to measure myself up.  You know, when other guys start talking war stories and you realize you never went to war.  Do you have what it takes?  Can you be a killer when you really need to be?  If you don't ever go to war, are you ever really fully a man? 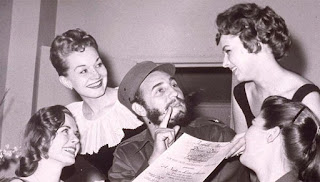 People, and especially women, write this off as ridiculous male posturing.  Of course you're special, J, and we love you -- you're sweet!  And let's not forget that I'm handsome.  But after 37 years of dealing with women and learning things about Samson, and King David, and the Proud Boys, and Che Guevara, and Fidel Castro, and Josef Stalin, and Aaron Hernandez, and U.S. Marines, and even Ted freaking Bundy, I'm convinced that whatever they say, what they really want, in addition to a handsome provider, is a man who's always ready to make life -- and profusely capable of ending it**.

Consider how many women are healthy and sexually viable -- a perfect fit, you would think, for making a baby -- but are rejected by us on a deep and completely insurmountable level.  The mind and body say "yes" to woman in general, but no to particular women.  To most women, in fact.  The soul sheds green light over the whole world; but the eyes, the ears, even the nose give you a red.  The difference between your woman and a woman is a matter not just of love, but disgust.  One of them you feel like licking up and down, and the thought of even smooching the other one makes you want to throw up.

Women do the same thing with us, of course, and they size us up and reject us so strongly that we crafted a whole series of laws around it, and some of our harshest ones at that.  Women are in love not with all men, but with man; and the slightest deviations from perfection are enough to put most of us off the list entirely.  A misbreed means no breeding.  She writes you off, a perfectly healthy man, as disgusting, or obnoxious, and if you push the attempt, what are you?  Well, unemployed lots of times, and possibly in jail.  In more civilized times, and in more offensive circumstances, at the end of a rope.  Death for disgust -- a fair trade, I think, even though putting it in words makes it sound ridiculous.

The question of romance and breeding is of course what do you have to offer?  But the other side of this, I think, is how can you keep from being disgusting?

**Somebody's going to question me here: do women really, deeply, truly want a man who can kill?  My answer to this is, don't they already like men who are tall?

A man's attractiveness to women is, at least in part, directly related to how big he is.  It puts her in her place; and if she feels dominated then it's only too easy to project this feeling of inferiority to others.  Far beneath her theories about the perfect man lies the fear of other men -- and what she needs, what she knows she needs, what she has always needed, is someone who can pick up the other men, and throw them off a cliff.