The day we were both born

On the day you were born I was born too, in a sense.  It was my first day being a father.  Before that I had seen people parent, both well and badly, but I had never done it myself.  It was like the first day I trained you to ride your bike or had you trace your first letter.  We pretend that parents are experienced and children have to be taught; but the truth is that every step we take in parenting for a long time -- from the first diaper to the first "conversation" -- is our first.  And most of the time nobody is around to help us do it.  And even if they were, I doubt we would listen.  In many ways I'm just as much a child as you are.

I try to remind you of this from time to time, and you'd think the apologies were self-explanatory -- but they aren't.  To myself I'm only a fool.  To you, when I screw up, I'm a villain.  You have no choice but to believe in my omniscience; and, God-like in my from-your-perspective know-how, I suspect I appear more like the Devil.  I ask for your forgiveness often, but do you hear me?  Do you understand what I'm trying to say?  That I'm only a fool?

I've tried hard to make you understand this, but I don't know if it's possible, since children can't really know what foolishness is*.   The understanding only comes from experience.  So I show you instead that I'm willing to apologize and correct myself -- constantly improving, but all the while worrying that I'm too late.  What damage have I already done?  Which things will you remember me for -- and hate?  I don't hold things against you because you're only a child.  But I'm learning too, and because I'm an adult I can't help holding things against myself**. 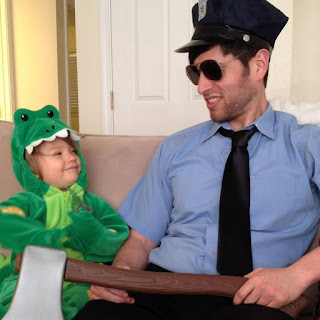 One great comfort to me is that, at least in theory, only a good parent could feel this way; and the upside of the remorse is that I'm tinkering, hammering, chiseling at myself until maybe someday I can do this right -- that somehow before this is all over I'll be able to catch my balance and parent with some grace, and we'll be laughing and singing someday instead of you getting upset and running off to your room.  But every day brings new challenges.  When I've mastered one thing another pops up.  You can't have the hang of something that always changes on you.  I'm getting older and younger at the same time.  I congratulate myself on mastering something and find out I'm a novice at something else.

What I'm trying to say is you mean the world to me; and every day, it seems, I screw up, in all kinds of little ways, and try desperately to fix it.  The wrong word here, the wrong approach there***, a glass of wine too much, too much a libertine in one way and too much a puritan in another -- these all come across to you as nothing, or obnoxious, or they make you angry.  To me each and every one is a fall from grace and a stab in the heart, and my imagination runs wild with all the ways we could have been perfect, if only I had been smarter, kinder, stronger, more patient.  I ask for your forgiveness, but only as the first step to forgiving myself****.  We talk lots about saving and parenting the children.  But my question to myself is: who can save and parent a parent?

This is the reason I don't believe everyone should vote.  What democracy does, in its purest form, is to give these worst-of-us a voice with no questions asked.  The more democratic you get, i.e., the easier voting is, the less hoops you have to jump through and the less you have to prove, the more people who have a voice, the worse the quality of the voters -- and the more highly they think of their ideas.  Democracy was supposed to protect us from our superiors, but it leaves you wide open to the inferiors.

One job of higher education -- and I mean anything above eighth grade -- should be to instill a sense of your own ignorance.  But a degree does nearly the opposite, and instead of knowing what they don't know and where to look for answers, the high-school graduate leaves with a diploma -- a badge that implies they know enough.

**Nietzsche writes in The Gay Science,

A thinker sees his own actions as experiments and questions—as attempts to find out something. Success and failure are for him answers above all. To be annoyed or feel remorse because something goes wrong—that he leaves to those who act because they have received orders.

I agree with the first part, but not the last.  I suspect the latter half is more of a wish than a stance -- to approach life like a scientist in a lab rather than as a father, a citizen, a lover, or a coworker -- i.e., than anyone to whom failure means shame, or regret.  But there's a whole aspect of life higher than practical and impractical; and honor, and loyalty, and purity, and reverence, and the romance of life, and the corresponding feelings of ruin or loss, are oftentimes bigger, more powerful, more deeply-seated than just what works.  They are in fact the meaning of success and failure.  How can you succeed if failure isn't painful?  And how can you fail if you don't feel regret?

Prudence guides our desires, but it doesn't determine them.  It's essential to everything, but it isn't the foundation.  It's more of a handmaiden than a master.  Prudence isn't what to chase but when and how -- and the man who pretends to idolize it without shame and honor and regret isn't standing above anything.  He's running from it.

***Concerning bad timing, only a fool would teach a 20 year-old Nietzsche.  I believe in this principle so strongly that I consider any professor who does it a fraud.  A 20 year-old is too young to get it.  He has yet to come up against life -- to have his idols smashed; to have his dogmas debunked; to have his passions end in disappointment or heartbreak; to dig deeply in himself for the springs of his emotions; to look at nature and see it for what it really is -- not a garden to play in, with "keep off the grass" signs and clear-cut fences, but a jungle and a straight-up fight.   Disillusionment is the thing you need before you "get" him, and it's the one thing a 20-year-old rarely gets, especially if he's rich and sheltered enough to be in college.  Thus you show Nietzsche to a middle-aged man and you watch him enjoy it.  You try to get a kid to understand Nietzsche and all you do is ruin the kid.  Give him Plutarch, or the Bible.

****The Buddhists teach total acceptance -- but how can you really love anyone and accept yourself at the same time?  How can you allow yourself to be less than perfect to them?