The common complaint of great pastors here is that Christianity has become too Americanized, and perhaps it has.  But wasn't "original" Christianity too Romanized, too Hellenized -- in the complaints of Paul, too Judaized?  The seed of Christ needed some soil to sprout in, and all soil means a compromise.  The germ will never be what it wants to be entirely.  It has to grow into what the soil permits it to, or doesn't permit, as Christ said Himself in the parable of the sower.  As Moses said when delivering The Law, I would have given you better laws, but you would never have put up with them*.  When pushing His ideas, even God knows His limits.

Thus right off the bat there was competition between the "sects," if you could call them that -- an argument over the gist, the flavor, the emphasis that each of them brought out of Christ's teachings: not a perversion, necessarily, but a slightly-twisted manifestation, as anything living has to take.  Every ideal, every sermon, every history has to be filtered through our ignorance, our cultural lenses, through our prejudices, through our general levels of intelligence, and we put our stamp on whatever it is God gives us.  They were given The Word and they turned it into a translation.

There was no way "real Chritianity" was going to make it.  Real Christianity was what happened when Jesus was started with Jews and the Jews were forced to give Him up -- to Syrians, Romans, Greeks, and barbarians.  It came "to maturity" when the religious Jews lost as they always do: because they were too rigid, too prejudiced, too artless to bring in the rest of us.  Their soil was too barren for a worldwide religion.  They pushed for circumcision and Paul pushed back harder and they were overwhelmed and they lost.  Judaism had to give up in order for Christianity to really begin, like Christ says the seed has to "die" in order for a plant to live.  It would never have taken off otherwise.  Almost nobody wants to be Jewish.

"Diversity is our greatest strength" is thus half true** -- but only if acceptance of diversity is the means to creating uniformity.  To be a great leader you have to surmount these differences, to create alliances, to be a master of putting your dream into others; to translate it correctly; to make it grow, with lots of water and sunshine, in fields that would otherwise yield nothing.  Every person walks out of his home with some idea or other about how he'd like his life to be, and is forced, by the needs of life, to give lots of it up so he can get what he needs.  There is always the us of our dreams and the us of reality -- somewhere in between what we say to ourselves at home and the us others want us to be; and real strength, as a social animal, isn't so much to "be yourself," but to give enough of yourself to make others become like you.  In other words, to persuade them you're on their team, to convince them of your facts, to put your spin on a shared situation, to deliver your ideals and methods in soothing, captivating words; to realize, in many cases, that to try for what you really want is too greedy, and that others have dreams too, and that neither of you are getting all of them.

People call this "political" and they consider it sleazy, but I have no shame in this give-and-take because everyone is forced to do it in some way or another; and what these essays represent is the way I personally see and dream for the world -- but rarely as I expect it to turn out.  And if I compromise some of these ideals or hide them or put them in smoother words to get along, to join a group, maybe to give them up for the time being, or maybe to give up hope of them forever, I still retain myself -- an inner me which nobody is able to satiate entirely, but which is always fighting in its own way to put its stamp on the world when it can.  In these essays I'm charming but forthright, honest to the point of brashness, oftentimes a broadsword or a meat-cleaver.  In real life I'm a rapier, or a stiletto -- I give up my Teutonic heritage and embrace the refinement of the Italians***.  I'm fit more for a court than a battle-field.  I myself am a seed, and I know the soil I'm planted in well.  There's a time and a place for everything under heaven, and mismatching your approach to reality is always a bad idea****.

Some of us get tired of this art of living with people, this "pretending," this compromising, and pretend to be "honest" -- by being rude, or artless.  This is a disguise for a lack of talent.  Lots of elderly people end up this way after years of trying to make their way and failing; and they hide in their rooms where they can bully their families and get what they want.  I've found I'm actually the opposite, and as I grow I make my way into the world to force my way onto it; not with rank, or riches, or brute strength, but with kind and well-styled words, and usefulness, and learning, and trustworthiness, and a good joke.  I have no ability to hide in my room: I need others so I put myself out there, with lots of thought and attention, so I can make "out there" into myself.  I enjoy putting my stamp on America, on Idaho, on a business, on Christianity, on everything I touch -- and having others accept my way because they see the sense in it, and because of me they like it.

*Moses isn't the only great lawgiver to admit he catered to the public; and Plutarch says that when Solon delivered his laws to Athens, he was asked whether he gave his best.  He replied, "the best they would accept."

**The Roman Empire was the last entity to do "diversity is our greatest strength" well, bringing in whole nations of foreigners, giving them rights, putting them under taxation, and sending them out to do battle.  Not saying it was an entirely smooth ride, but Rome was on top, or close to it, for over a thousand years -- although the original Romans were outnumbered by, and eventually totally dependent upon, the foreigners they originally conquered. 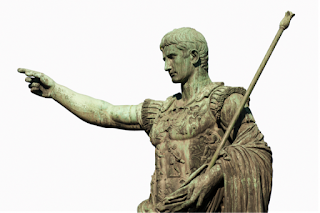 We're trying this path again, and if we do it right, we may end up on top for another thousand.  The Anglo-Americans were the spark that got this country going, but every race of geniuses and conquerors gets tired, and I have a feeling the Hispanics, and possibly eventually the Asians, will be the fuel that turns this flame into a bonfire -- as the Germans and the Irish kept going on (and in many ways perverted) the path the Anglos carved for them.  The great fear in any mass immigration isn't that something's going to change, but, in a world where both natives and immigrants have to give, that you're not exactly sure what.

No Roman republican would have felt at home in Rome in AD 100.  But his great great grandchildren were better off for it, and I have a feeling it felt like home for them.  We fear for our children because they can't grow up with what we grew up with.  But who ever grows up with exactly what his parents did?

The problem today with our diversity isn't that the leftists are bringing in people*****.  It's that they're bringing them in too fast, from too many low IQ regions, and telling them we're the enemy.

***When I fear change I remind myself that I'm the bastard, half-breed future people feared a hundred years ago -- equal parts Scotsman, German, Spaniard and Mayan; a terrible monster to all believers in racial purity -- and part of the last fighting hope, it seems, of true American civilization.  Cicero himself wasn't from Rome, but from the once-upon-a-time enemy city-state of Arpinum.

****Disillusionment is a painful thing to go through, the giving up of a dream.  We thought things were one way and we found that they were another.  But if a realignment of your perceptions crushes some dreams it opens the possibility of others -- the impossible is finally tossed aside, and we become capable of doing what we can do: an affirmation of real life, not a loss.  Painful, but the only way you can at least achieve some of your dreams.

*****A strong objection could be made here.  Rome at this point wasn't a republic, but an autocratic empire; and they could afford to give rights to barbarians because illiterate barbarians didn't have the right to vote.  I would also add here that there's a difference between bringing people in to sustain the empire and bringing them in to end it.  There is the welcome mat of a nationalist and the unlocked gate of a traitor -- and the people running the show, in this case, are clearly not our nationalists.