When I was a small boy I was told about a coming judgment.  Mom said that God was the judge, but what stuck with me more forcefully was the idea of how He would do it.  There would be a great TV in the sky with all our deeds on view -- all of them, large and small -- and everyone would see what kind of life we lived. 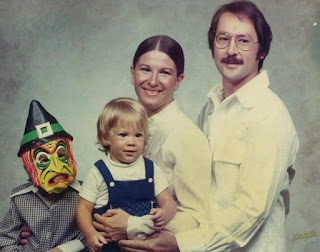 This of course got lumped in with a viewing of thoughts* -- far more terrifying than a viewing of deeds, but without which a judgment of deeds is impossible.  Somehow God Himself was pushed, accidentally, out of the picture.  He was running the show but not the audience Himself.  I came to assume, not on an official level but an emotional one, that God had a deeper understanding of the whole mess: that His thoughts were so far beyond ours and His understanding so deep that He was with us the whole time and had almost given up judgment.  Almost coming at things from an engineer's perspective instead of a moralist's.  I believe this was due in part to Jesus Christ, but mostly due to the fact that He knew too much to be shocked by anything.  He had already written parts of the film, produced it, seen it, and considered it a re-run.  Tia Maria?  First viewing.

When I was a believer, I had always said I was a Christian in doctrine.  But in retrospect, what this makes me is a Chinese pagan.  I'm afraid of the judgment, but not of God's judgment.  I worry about what my ancestors, my parents, or even my children, will say*.  I worship none of my relatives.  In fact I can think of none of them specifically I look up to.  But the idea of being fully known by them is a trainwreck, and the only consolation, so far as I can think of one, is that they'll be fully embarrassed about being seen by me.  Every time one passes away, I examine myself fully.  The report I give myself is usually not kind; and if anyone's is, I consider him a snake**.

This isn't a belief I chose, but one I was born into, and bred into, and one which grows stronger as I grow older.  I've heard of many men getting more religious before they die, out of a fear of hell.  But who ever heard of an American who got more pious out of a fear of his dead grandma?  The truth is that I, the man I know more than anyone else, remain a mystery -- to myself.  One of the joys of searching, chewing, digesting your own thoughts is this perpetual discovery -- that there's a deeper you than you ever imagined, and that when you put yourself into words, what you find is you're actually a foreigner.

PS: Am I saying this is my theology?  That I believe this is how the universe really works, and we can count on it happening?  No -- the universe remains a giant question mark.  I'm merely saying here that The Final Judgment affects me on an emotional level, and I have little control over it.  Train up a child in the way he shall go, and when he is old he will not turn from it is how Solomon put it.  Nor would I have it otherwise.

There are men who'd pick otherwise, however, and I admit that a cold, bleak, death-is-the-end atheism has one and only one advantage: that it can hide you as a person from exposure.  But a man who takes refuge in the void negates his sins by negating his life.  We assume he does this because he's a scoundrel -- but he could be like the rest of us, living day to day, with secret loves and hates and little shames, and be so sensitive to his own reputation that he'd rather be wiped from the cosmos than be found out.  And maybe if we consider ourselves he's right.

The genius of Christianity lies here: that the Great Shame is coming, that it will be so bad that each of us will get leveled into the mud, and that somehow, by some almighty sleight-of-hand, we'll some of us come out clean.

*The Scriptures are clear on our thoughts: The Lord saw that the wickedness of man was great in the earth, and that every intention of the thoughts of his heart was only evil continually. This looks like hyperbole to me; but even if it is, what can it mean?  That deep down we're so rotten and selfish and perverted that our best attempts to be good are still tainted with evil.  Christians read Freud and threw him under the bus -- for agreeing with God***.

**For all the apostle says on sin -- for whoever keeps the whole law and just stumbles at one point is guilty of breaking all of it -- he never mentions that this is the way we think of nobody.  If we did it would be a sin in itself.  Real life is much more complex; and we usually judge people not by some one brushstroke, but by the overall picture they paint.  Yes David killed Uriah -- but did you see the way he spared Saul?  Yes Thomas Jefferson owned slaves -- but did you see the way he liberated us?

Beside this there's one thing each of us won't see, and it's the thing everyone else thinks is obvious.  None of us really has a clue what we look like when we smile with our eyes closed after waking up in the morning, or the gleam in the eye when we're in love, or what we look like holding our arms out so a daughter can run to us and be picked up.  We've seen ourselves in the mirror but never as a son or a father or a lover.  We have no idea that a whole host of characteristics, completely amoral in nature, endears us to others; and that many of the things we miss are responsible for others glossing over our traits that we hate.  We mostly know how much evil we cause -- but the good things, the beautiful things, the indescribable and unquantifiable things flow through us almost unknown.  Many of us are beautiful -- and we will never know exactly how much.

***When I wrote this line I was forced to pick up an old copy of Fromm, the legendary German psychologist, on dreams and dream interpretation:


To [Freud] the child has many asocial impulses. Since it lacks the physical strength and the knowledge to act on its impulses, it is harmless and no one needs to protect himself against its evil designs. But if one focuses on the quality of its strivings rather than on their results in practice, the young child is an asocial and amoral being. This holds true in the first place for its sexual impulses. [...] The young child has intense sadistic and masochistic strivings. It is an exhibitionist and also a little “peeping Tom.” It is not capable of loving anyone but is narcissistic, loving only itself to the exclusion of anyone else. It is intensely jealous and filled with destructive impulses against its rivals.

[...] Freud’s picture of the child is remarkably similar to that which St. Augustine has given; [...] and Freud holds that the benevolent, loving, constructive impulses in man are not primary.  [H]e claims that they are a secondary production arising from the necessity to repress his originally evil strivings. Culture is understood as being the result of such repression.

-- in other words that goodness is tacked on as an afterthought, and many times actually a paint-coat facade.  I could only faintly remember this passage, which echoes the evangelist Paul Washer, and looking it up reminded me less of Freud, and more of how much I've forgotten about him.  I read for hours and was left with only fragments.

Montaigne complained incessantly about his bad memory at the same time he furnished, more than any author I know of, a burst dike of anecdotes and random quotes.  He was extraordinary to his readers and an offense to himself.  To a man who prizes wisdom, the mind is a faulty thing.  We study for hours and are left with mere seconds.  We want to take everything but the bag we carry it in has holes in it.  We're showered with great thoughts, only to find most of them flushed down the drain.  To the experienced searcher, the problem isn't finding something new -- it's hanging on to what we've already found, and not getting bored doing it.