My position on r------d people* is exactly the same position on everyone else: the good ones I keep, and the worst ones I hate.  I've had more than one r------d enemy, in fact, and some of them are so brutal, so treacherous, and so incapable that I find no use for them; and I think the best use for them is the exercise we'd get running them out of town.  There are autistic people I've enjoyed, day after day, and been happy to see, and others who threatened my friends.  Some of them are sweet and others are rapists.  Some of them are silly and other ones are spoil-sports.  But J, some say, they can't help it!  Can the rest of us?  Are we really so different from them?  Are any of these categories I mentioned things we don't experience ourselves?  So what if we can think things through -- many of us still make bad decisions, rotten statements, and horrible messes, especially when acting in groups**.  We give the handicapped a pass because most of us could do better.  But I doubt in many cases we could.  A personality is something set in stone.  A sourpuss, a loser, a cheater and an idiot will be what he'll be, and many times was born that way.  God has given us our trajectory -- in most cases, our job is to act it out, not to change it***.

This being said everyone has their place.  I don't want a Caligula running an empire or a drunkard driving a car any more than a sourpuss running a checkstand or a pedant running a high-school.  If we were born for certain things then let us find them or die.  To see a mismatch in office is a sneak-peek of hell.  There are things too important to not do -- but isn't it worse, many times, to do them wrongly?  I've seen black dunces become engineers through affirmative action programs, when they can barely construct a whole sentence.  I would rather drive miles than cross one of their bridges. I would rather ride mules than drive one of their cars. 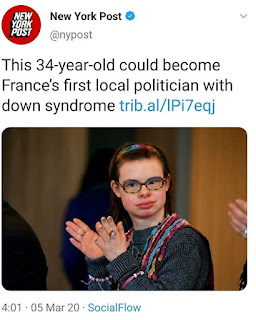 This week the New York Post says France may have its first retarded politician.  My immediate reaction was, why?  I then imagined a whole host of people, probably including her parents, who urged her on to running; who wanted her to feel good, and so put her in the global spotlight -- highlighting her genetic defects, putting them, front and center, into papers; friends and family cheering her on so they could feel like "good people".  I thought of all the money spent; all the important debates dragged down to a circus-show; the majesty of office degraded; the belief in democracy uprooted; the country of France, the first, to note, to do this, made humanity's punching bag -- !

I know we like to believe "anyone can make it," but I urge us to reconsider the issue.  Think of what it means to be on a town council: that it's the smallest office available where you can still take money by force.  Where schools are built and run to train the next generation of citizens.  Where streets, the mother of most commerce, are built and maintained.  Where police are sometimes policed.  Where hordes of jobs are dependent, and thus where many people get bread for their families.  Just think of all it means, this office, and that the election can go only one of two ways.  That this unfortunate woman, crippled by God in her brain, is going to have her dreams built up and then shot down in flames, or worse -- that in a fit of public "morality" she will actually achieve them.

I was asked, this morning, whether my posting of the article, and my sarcastic comment about it, made me a bad guy.  To which my response is simple.  I'm not making fun of the woman.  I'm making fun of her supporters -- who may not have down syndrome, but are 100% retarded.

*Plutarch writes in his biography of Solon that the Greeks (I would say like us and the Nazis and the Soviets) were big fans of euphemism.


Thus they refer to whores as mistresses, taxes as contributions, garrisons of cities as guards, and the common jail as the residence. Solon, it appears, became a pioneer of this device, when he referred to his cancelling of all debts as a discharge.

But you can only go so far with this.  We have banned the word retarded only to replace it with handicapped, replaced handicapped with handicapable, and handicapable with differently abled.  We forgot that retarded, which literally only means "held back," was already a euphemism for mentally defective -- itself neither an insult nor a palliative, but a description.  We now refer to mental disorders, ranging from depression to psychosis to down syndrome, as neurodiversity.  But change things as we may, we can never get rid of the thing in itself.  We've ditched the name and kept the sickness.  We deny that it's even a sickness, and are now openly questioning whether curing these problems is an insult to the uncured -- which is euphemism taken to its logical conclusion.  A complete denial of reality.

The names stupid, idiot, moron, and imbecile -- all unkind words for "retarded" -- still stand.  The kind word was cast out.  The trendy morality isn't only a lie.  It has no standing in morality whatsoever.

**Nietzsche writes, Madness is rare in individuals—but in groups, parties, nations, and ages it is the rule.

Tell you the truth, I wonder why I even wrote this essay.  Regardless of what a word originally meant, the purpose of language is to convey an idea; and if the public, or at least the most easily angered part of it, believes retard is an insult, it is -- and fighting against it is spitting into the wind.  In any fight between a good reason with a small payout and a tightly-held prejudice, and especially one that makes the holder feel moral, the prejudice is likely to win.

***Am I saying that no man can change, for better or for worse?  Absolutely not.  What I mean here is that improving your character is itself a kind of character; alongside the tendency to leave it alone, or to let it implode.  To be born with a sense of gusto, a strong, churning mind, a dynamism that keeps you from going stagnant -- this is a gift of God.  We all have to start out as fools.  But not all of us have to end as one.