Notes on the pandemic 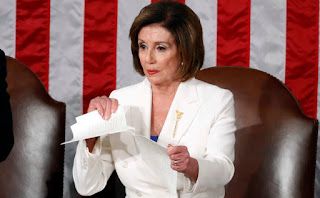 At some point last week, in the middle of this pandemic, I realized the inevitable.  The chance that my personal favorite barber would remain open into the foreseeable future was nil.  This led me into one of two options.  I could resolve to just get on with life, and when worst came to worst, to shave my head.  But the angel with golden flowing locks on my shoulder said hell no.  He kicked into high gear and gave a suggestion.  "Why not call her up and work out a deal?"  So I did.  She was in the barbershop but not working, according to the receptionist, so I asked if I could speak to her.  When she answered, I got to the point.  "Look, Kim, I'm a vain man.  I can shave my hair any time and do fine, but why should I when I've got you?  So just in case the shop closes down, how about I get your number and we arrange something ourselves?"


Her response was that she had just then been fired, and the rest of them were getting canned on Sunday.  She had no means to pay for her rent or food.  A kind lady, and a great barber.  No income in sight but me and any other friends who might go to her no matter what the authorities say.  So when the news came back the other day that Pelosi put a slew of unrelated nonsense into the federal relief package and killed the deal, I was furious.  That either side would pick now to ram a bunch of pork into an absolutely necessary relief package, putting possibly hundreds of millions of people, men, women, and their children, out of their jobs and eventually out of their homes, proves that our "leadership" is comprised of self-serving, partisan jackasses.  There should be one bill, and one bill at a time, dealing with every form of relief.  There should have been one bill a week ago getting every American a check to sustain them for a shut-down, and then one for businesses, and then one for anything else.   But only one at a time.  Anyone who plays pork politics in a time like this, and then pretends it's the other side's fault, deserves to get the virus -- and I hope they do.  To hell with them.

What our "leaders" fail to understand is that every honest job, if it pays for someone's food and shelter, is essential.  I'd give us to two weeks to quarantine the whole nation so long as the stimulus checks are a given.  Beyond this, should we fail to contain the pandemic, I encourage everyone to cough on each other, and get this shit over with as soon as we can*.

PS: A question has been asked of me.  What about the elderly?  My response is simple.  I'm not an "OK Boomer" Millenial.  I have a both a heart and a brain.  I think old people are adorable, and many of them play a crucial role in our lives.  But if you're over 70 and nobody you know bothers to think, "hey, I wonder if I should check on him, and maybe bring him groceries during this crisis," you've been making lots of bad decisions for decades.

The Lieutenant Governor of Texas said earlier that he'd rather die than see his grandkids suffer too badly.  The manliest thing I've seen an old man say in a long time, and the media made fun of him.  Well, I know you could probably guess I'd say this, but I think any father or grandfather who would rather live another ten to fifteen years than have his kids live happy lives isn't worthy of life.  Every old man should have a little soldier inside him or he should hang himself.

*I should note here that the "experts" disagree with me.  What they're recommending now, in many cases, is that society should be locked down for months, and even possibly over a year.  This reminds me of when I was a kid, and my dad, a combat veteran, used to tell me stories about Vietnam.  He was always frustrated with the politicians, and said they were the reason we lost the war.  But this is the opinion of the generals and the army.  They're in it and see the carnage, and the loss, and want us to get it over with.  On the other hand there were the politicians and civilians, looking at the fiscal cost of it, and the possibility of an all-out broader war with China, and the possibility of losing elections, and other things the warriors are too brutalized to care about.  Get it done, the generals say.  Rip the bandaid off.

I believe this is the perspective of the specialists today.  They spend their lives on a project and tell us how to get the thing done.  And they're right.  If we shut down the country we'll get rid of the virus.  But I doubt any of them are experts in urban warfare; and when the focus shifts to that after a massive collapse, the "experts" in their nice suits and comfortable houses will be the first to go.

What we've forgotten is that you can't be an "expert" in everything.  There's simply too much to know.  And in life there are too many important things to chase.  To be an expert of life you have to hear the experts, weigh all their one-sided opinions, and then modify their suggestions -- to be ready to tell them no.  You can do part of what they want but not all of it.  You get good at balancing all the expert opinions, having a broad knowledge of many aspects of living, and smart people will call you a wise man.  But an age of experts, leaning on them, trusting them wholeheartedly, putting them on a pedestal, panicking every time one shows up in a crisis, scorning everyone who disagrees with them as ignoramuses and country bumpkins, is an age of idiots.