On the death of Cato

This week we've been waiting for World War 3 to start.  At least that's what everyone's been telling us.  It started about a year ago, actually.  A little event nobody even noticed that turned into more events and got us to here.  And if you want, you could say it started a lifetime ago.  Donald Trump put the squeeze on Iran last year because they put the squeeze on President Obama.  They put the squeeze on President Obama because the Ayatollah took over in 1979.  He took over because Mohammed's followers couldn't agree about who takes over for Mohammed.  And Mohammed only took over because nobody could decide who really spoke best for Moses.  So you could say this was four-thousand years or so in the making.


When times like this happen and people start to panic I like to remember this.  That these things never come out of nowhere, but everything grows out of something, and it never has the choice to grow out of anything else.  The flower has no choice but to come out of the stalk*.  From where we're standing it looks like anything can happen.  When we look back, many times, it feels like only one thing could've.  We can only make our way through what we've been given.  We rarely know what we've been given until we get it.  We have no power, in the big things, shy of suicide, to abandon it.  You can live honorably and bravely through it, but you can't avoid it, and most times you can't predict it.  Things are coming for you, both terrible things and beautiful things you can't even come close to avoiding, and your job, as a man, is to prepare for the likely stuff, and keep your family's heads high. 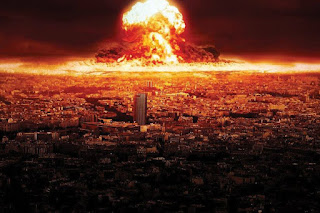 When people start to panic and tell me there's a plague coming, or a great depression, or a nuclear war, or that Yellowstone's going to explode, or that the planet's just going to go gray and die, I like to remind them we're going to die anyway, and to keep their cool about it.  Fight if you have to but don't freak out, and don't do anything rash.  I can't pass on immortality but I can pass on a cool head if you'll take it.
And I'm surprised at times in this manliness by others, and if I can, I try to rise to their level.  A woman once told me a group was planning terrible things for our country and she was depressed about it because they've been winning.  To which I told her we always had an escape: if worst came to worst, we could always blow our brains out**.  To which she replied I'd rather blow their brains out: a much manlier, more beautiful, more useful proposition.  It's the sentiment that gave us every single war hero, from King David to George Patton.  It's true that Cato ripped his own bowels out, but before that he had an army and was trying to rip Caesar's.

I had a conversation yesterday about this belief -- or rather about my non-belief.  The Christians asked me how I deconverted.  I ask them how I converted.  I tell them that well before I told anyone I was Christian I began to believe, and well before I told anyone I didn't believe I stopped believing it.  We always convert before we admit it.  What we believe takes place well before we want to admit it.  New ideas brush up against old ideas and paint a new stroke on an unexpected tapestry.  We don't change the ideas so much as the ideas change us.

On this note I'm reminded of the two-pronged teaching of Marcus Aurelius: that 1) as we wake up every morning, we accept that we're going to run into all kinds of scoundrels and half-wits and blowhards and psychos; and 2) that if we're going to make it we have to be ready not to change them, which in many cases is impossible, but to pity them -- for being themselves.  At least this is what I'd live by if I wasn't inclined to mockery.  Solomon says there's a time for both, and what dictates the time for me is whether or not I like, or find use in, the target.

***I admit that incentive often plays a role in this game, but without incentives does known falsehood ever really gain ground?  Yes there are non-believing priests.  But would they stay priests if there wasn't money and power and prestige behind it?  Would an apostate-in-waiting ever stay, if there wasn't a social, economic, or sometimes legal penalty for leaving?

**If I was out-manned by a woman, I take refuge in the idea that at least I wasn't alone.  Nietzsche wrote, in Beyond Good and Evil, The thought of suicide is a powerful comfort: it helps one through many a dreadful night.  You can take this as an approval of suicide, but you would be wrong.  They key word here is through.

PS: The finest thing I've ever read on this subject is Montaigne's essay, That to Study Philosophy is to Learn How to Die.  I recommend the Donald Frame translation, but Cotton's ancient one, if you can make sense of it, is usually free.