Concerning the happenings in Alabama

Republicans tell us abortion is the real racism in America, but I have yet to buy it.  Never have and never will.  Sure Margaret Sanger said she wanted to wipe blacks off the planet, but who's actually wiping blacks off the planet?  The blacks are straight-up asking for abortion; and if this is racism then so is black suicide, black-on-black gang shootings, and death via Big Gulps and Kentucky Fried Chicken.    There is no conspiracy here, even if Candace Owens, a woman usually of great intelligence and character, says 40% of abortions are performed on only 13% of the population.  Whites provided an ugly "service" and black people love using it.  This isn't racism but collusion -- much less a clash of racial interests than a fusion.  It's as close to waltzing as killing ever got.


Besides this the right wing and the left wing had a deal and the right wing ruined it.  Nobody wants Alabama's bastard children and we all know it; the right don't want to pay for them and the left don't want to have them.  So the deal was the right would beat our chests and feign moral superiority and the left would do the dirty work for us -- not profiling and policing and jailing and occasionally executing, which is hard and expensive unpopular work, but deciding, on their own, that they aren't fit to have children and then aborting them.  A decision any woman of any race could make if she made the decision soon enough.  We have no idea, it's true, whether those millions executed in-utero would have gone on to be rapists or preachers or vagrants or doctors; but we can guess, and if everything the Pope says here is true, we can bet on more vagrants and rapists.  God forgive us for killing the unborn saints.  But how many birthed saints have we saved from the unborn villains? 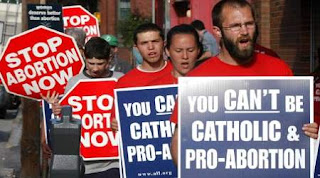 Until now I've considered myself pro-life.  I still am in many ways.  I've seen the pictures and videos of abortions and I hate them.  But I've also seen videos of race mobs; and the idea that a whole slew of inept, unlettered, victim-mentalitied blue-voters is right around the corner means lots of us are going to die early anyway -- and that the ones who're going to suffer and die, due to this unGodly piece of legislation, are going to be fully-developed, and conscious that they're being strangled and oppressed by an enfranchised ghetto.  The Great Alabaman Baby-Mama Explosion of 2020 (and let's not forget the other Southern states following Alabama) will be followed by the Great Crime Wave of 2035; and I predict white people will be blamed for it, as usual.  And they will be rightly blamed for all the wrong reasons.  The left will say the catastrophe is due to privilege, or unequal distribution of wealth, or that too many white people own businesses, or live in their own neighborhoods.  In reality, it was because the right-wing decided to protect illegitimate children from their own mothers.  The mothers judged themselves unfit and we didn't believe them*.  We should have.  We can't handle our own fatherless epidemic and we're adding tens of millions on top of it.

Besides this there's another issue entirely.  The first woman who goes to jail for aborting an alleged rapist's baby will become a poster child for the left-wing, probably as big as Rosa Parks.  No man of any decency will be able to stand against her.  Every woman in the country will wonder what we'd do to her if she was raped; and the chance that this ill-bred coalition of Holy-Ghosters and lazy moralists will be able to stand is unlikely.  I predict that Alabama, aside from turning left in the next 18-20 years due to a surge in the Democrats' most dedicated fan base, will turn purple before then; possibly even blue.  On top of this, a national movement, led by California and New York, which will probably hold sway over the nation by 2030, may out of this terror restrict the rights to restrict abortions; and red states may lose all chances of saving some lives by trying to save all of them**.  It's likely to be a disaster.

What this reminds me is that the "right" thing isn't always the smart thing; and that war itself, one of the most life-affirming things around, is the murder of many innocents -- who would much rather not be there, and have almost no control over it.  And yet it's been sanctioned by God for the defense of society itself.  Or so at least the Bible implies and Saint Augustine tells us.

*It's easy (and lazy) to draw the conclusion that I don't want black babies to be born in this country.  I want to say, right here and right now, that this is a misunderstanding.  I want Candace Owens to have ten kids and Nicki Minaj to have none.  I want a surge in the best parts of the black race and stagnation for the worst parts of it.  It's my wish that God blesses the finest of all races with many children -- and that He inspires the worst of all races to abort them.  I wish we could guarantee this was happening, but this is the nature of most controversy -- the fact that things could go either way.  I believe the pro-lifers are good people, mostly.  I believe the pro-choicers are less good -- but the people who take them up on it are even worse than them, and at least they admit it with the decision.

This being said, women who are close to me have had abortions and hated themselves for it, and then gone on to become wonderful people with wonderful children.  Did the abortion benefit them?  Yes -- but the guilt of killing a child, which onsets sooner or later, never quite left.  Sex outside marriage is a terrible risk.  Few these days are able to resist it.  God bless those who value their children and keep them and raise them right.  But God keep us from those who are unfit for it.

**Lincoln himself, the greatest slavery fighter the world has ever seen, shy of maybe William Wilberforce, refused to end slavery in Missouri mid-war because he knew better.  Shelby Foote says in his Civil War Trilogy that Maryland, Delaware, Missouri and Kentucky were all slave states at that point -- and still at the time neutral.  The "principled" thing to do, at that point, was to tell them to give up their slaves or die holding on to them; but Lincoln knew if he said this the war would be lost.  The South would gain the momentum and not only end Northern advances, but possibly reverse the invasion and end up conquering the North.

So when Major General John C. Fremont declared that all slaves in Missouri would be set free and all traitors would be shot, Lincoln reversed to decision "on constitutional grounds." He said that freeing slaves belonged only to congress.  He didn't even draft the Emancipation Proclamation (an executive order, I remind you) until two years into the fighting.

Ignorant people said this was because he "didn't really believe in abolition."  The truth is he believed in it so much he knew when not to abolish.

PS: This essay makes me glad I'm not famous.  I'm not even submitting this to be published.  I think these things out but I don't want responsibility for them; and whether or not I was pro-life or pro-choice I wouldn't want to enforce it.  I see great danger in one and great sin in the other.  I think contraception has both harmed and saved our society.  I see clever stands that ruin souls.  I see beautiful souls take ruinous stands.  Perhaps my soul is already ruined -- and if it is, as it may very well be here, I want to drag as few people along with me as possible.  I don't believe in Christianity, but I believe in the words of Christ: And whosoever shall offend one of these little ones that believe in me, it is better for him that a millstone were hanged about his neck, and he were cast into the sea.  On this issue, even to remain neutral is to wash your hands like Pontius Pilate.

I want to be an honest man, and beyond this to be a wise man.  But there's a wisdom that ends up in foolishness, and I admit I might be a fool.  As such I loathe an important decision.  I see too many sides to escape with a clean conscience.  An intellectual with a conscience, someone who has to sift the finer things of life from the bad, and what is right from what seems right, knows a lack of power is a great gift from God.  If he falls he takes less people with him.

Support The Letters by sending a gift to paypal.me/supporttheletters or
www.venmo.com/JeremyEgerer