Jesus is Lord -- but only of the rich

We've all heard the passages about the meek inheriting the earth and camels going through the eye of the needle, but my personal theory is that God is only the God of the rich, and maybe the middle classes too.  The poor have almost nothing to do with Him.  They get all the fun.  The well-to-do get all His rules, which means they get a God.  Nay, they get worse than his rules -- they bear His cross.

Consider the Golden Rule.  We've all heard sermons about giving to bums or Haitians or socialists or failed states.  Now try and think of one sermon about leftists not being covetous of capitalists -- a sermon you can't think of because nobody has ever preached it.   Nobody has ever seen Pope Francis get on a pedestal and, reminding us to do unto others as we would have them do unto us, call for lower taxes on the rich.  We don't imagine ourselves in the rich man's shoes, the first step of applying the Golden Rule, because the rich man has a God and we don't.  He's asked to walk the ways of the Lord and the poor man is asked for nothing. 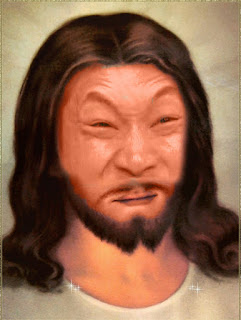 Further considering this so-called "Golden Rule," nobody has ever asked the Mexicans to respect the American border like the Mexicans want the Guatemalans to respect the Mexican border; and beyond this we've all heard sermons against racism but none for turning the other cheek to the racists.  Nobody asks black people to go the extra mile for the neo-Nazis, or to turn their cheeks to police officers, or to give white people even the benefit of the doubt.  The sermons all go the other way, and everyone else is asked to bend over backward for black people -- a thoroughly Satanic concept if there ever was one.

We could go on.  We might ask the Syrians to not worry about your life, what you will eat or drink; or about your body, what you will wear.  Is not life more than food, and the body more than clothes?  We might ask them to be grateful for what they have, instead of passing up Greece and Turkey to get to the German women; and beyond this we'd ask the gay Christians to not judge the Baptists over marriage licenses -- for as we judge others, so shall we be judged.  Upset about voter ID laws?  Obey the authorities, as Paul commanded; and if you're upset about this, perhaps a sermon about telling the truth about your age, name, and country of citizenship.

It's easier, of course, to direct these rules at the rich, who are always the minority. and at well-to-do people in well-to-do countries.  Godless Christians never admit that the wealth of any single Christian can be exhausted and his neighborhood can be ruined and nobody will be better for it.  They never talk in church about how it feels to have something beautiful stolen from you by someone who didn't deserve it.  We never hear about how it feels to have your neighborhood go to pot because someone was being too generous to criminals, or junkies, or illegal aliens, or layabouts on Section 8.  They never ask how it feels to have to hire people who are useless and obnoxious but the "correct" skin color; or to be slandered every day for things you didn't do; or to even be constantly reminded about the horrible things your ancestors did.  Nobody cares about the feelings or the safety or the rights of the "rich," because we've bought into the lie that being rich means being the target of Jesus's sermons.  Almost as much as being "white" means being the target of Jesus' sermons.  If this is the case, then I say only well-to-do white people can be Christians.  They're the only ones who have to follow Him.

But being poor isn't a virtue.  In fact you never really know how good you are until you're dealing with money and power.  Poverty is also not a vice.  Poverty is the result of the injustice, ignorance, imprudence, imbecility, laziness and bad luck of the poor or the people who actively oppress them; and if there are rich men who are rich due to their own greediness, there are poor men who are impoverished due to their own villainy.

Consider last that hell, according to the teachings of the apostles, isn't a place men go because their wallets are full.  It's a place they go because their hearts are corrupt.  It's the place for people who call Jesus Lord and then hear Him say why do you call me Lord and then not do what I say?  It's for the people who call Jesus their Savior and then pretend as though they haven't committed any sins.  It's for the poor people of the world who think the rules only apply to men who have built things.  It's for the Pharisaical minorities who cherry-pick the commandments and then apply them -- to everyone but themselves.

We've all heard Narrow is the way and straight is the path that leads to life, and there are few who find it.  We have yet to hear any preachers remind the world that the poor comprise the majority.