I want you to take a good look at these pictures: really take a moment and study them. The one on the left is a portrait of Jonathan Edwards, quite possibly the greatest theologian who ever lived; a man who spurred an important religious revival and left behind him generations of doctors, lawyers, pastors and statesmen.  The portrait on the right is Jean-Jacques Rousseau, quite possibly the greatest and most dangerous author of the French Enlightenment; a man who spurred the massacres of the French Revolution, and left behind him scores of bastard children. 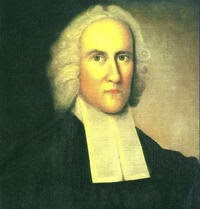 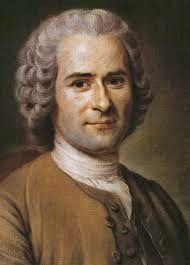 
This goes to show that a handsome face and a kind smile aren't always indicative of a good life.  Men can be smiling and laughing and be rotten the whole time.  But can anyone believe you're living the right way if you're always frowning?

Solomon laments the success of the wicked, and David's only hope for justice was in the final judgment (Psalm 37); Voltaire was never portrayed without a smile, despite universal condemnation by every serious Christian of his day (although I think he was partially misjudged).  Was Voltaire right because he laughed at Christianity, or David wrong because he mourned with the oppressed?  No -- but if you could travel back in time, and Voltaire was always laughing and David was always crying, after a while you would begin to think they were.  Whether Edwards or Rousseau were happy or not isn't really our concern, because they lived so long ago that we may never really know -- but we can better gauge our contemporaries, and we know instinctively that visibly miserable people aren't worth following.  Happiness is the reason we fight over ideas in the first place: if we argue about whether liberals or conservatives are more happy, and skirt the idea of ideas altogether, it's because we know that if one group is happier on the whole, they must be doing something better.

My point is that if you want to convince other people that you're in the right, make sure you're polite and cheerful; and if you can't always be the smartest or best behaved person in the room, at least smile so that others won't think you're the worst.  If you want people to hate you and your cause without even a good reason, be unconcerned with your appearance, talk about "big" things in a boring way, and above all wear a frown.